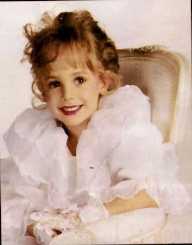 JonBenet Ramsey was the younger of two children to her parents; John Benet Ramsey and Patsy Paugh born on August 6, 1990. She was killed at the age of nine by strangulation. Her homicide death triggered media and public interests and opened police investigations.

JonBenet Ramsey was buried at St. James Episcopal Cemetery in Georgia. Her tomb is next to her mother who died of ovarian cancer and her half-sister who passed away due to an automobile crash.

The police suspected her parents of the murder because the ransom note found at the crime scene was unusually long and contained un-usual exclamation marks and acronyms. After three weeks of analysis of the letter, new charges were opened to Patsy, the child’s mother, as the letter contained different variations of the letter ‘A.’However, in 1998, the District Attorney stated that DNA analysis revealed that none of the immediate family was guilty of the crime because all the 437 items of evidence presented pointed away from them.

In 1999, the parents received new charges for permitting the child to be in a threatening situation and for obstructing the prosecution of a person suspected to have committed the murder. Lack of sufficient evidence led to dropping of the charges against them.

Although the parents agreed to television interviews on several occasions, they resisted police questioning. In 2002, the District’s attorney successor, Mary Lacy, took over the case pursuing alternative theories of a non-family member committing the killing.

By 2003, the investigation found a trace DNA of an unknown male on the victim's clothes resulting in an apology to Ramsey’s parents and clearance from the case in 2008. The Boulder Police Department took over the case from the District Attorney in February 2009 and reopened the investigation. Although they used latest DNA technology in their research, they ended up with no new information.

New Forensic analysis conducted in October 2016 proved that original DNA found was from two individuals other than JonBenet Ramsey. The investigation continues to be an active homicide case.

There are two theories concerning the murder, the first being the Intruder theory pursued by Boulder District Attorney’s office. The theory states that the intruder broke into Ramsey’s home through a broken window and subdued JonBenet using a stun gun taking her down to the basement where the killing took place and a ransom note left.

Further investigations identified that there were more than 100 burglaries and 38 registered sexual offenders in Ramsey’s neighborhood on the night of Jon Benet’s murder, a more aggressive investigation of intruder theory should have been more aggressive.

The other theory suspected her mother Patsy, her brother Burke but the Boulder District Attorney dropped this case after DNA analysis proved none of the close family members murdered her.

The autopsy conducted confirmed that the cause of the death was asphyxia by strangulation associated with craniocerebral trauma. It also revealed that she had eaten vegetable or fruit material conceived to be pineapple.

Media investigations identified over 1600 suspects in the case.

In 1999, the family’s libel attorney made a trial against several people and companies who reported the case. Another defamation suit followed in 2001, against authors of ‘JonBenet: Inside the Ramsey Murder Investigation,' and later on another suit against John and Patsy Ramsey for the publication if their book, ‘The Death of Innocence.’

In November 2006, John Ramsey’s friend filed a lawsuit against an anonymous web surfer for two messages containing the pseudonym ‘Undertherader’ which indicated Westmoreland in the murder.

On October 2016, forensic pathologist Dr. Werner Spitz accused Burke of the killing during a CBS interview and a documentary program ‘The Case of JonBenet Ramsey’ resulting in a defamation suit against Spitz on October 2016. Later on December 28, 2016, Ramsey’s and Bruce’s lawyers filed a lawsuit against CBS.

The murder of JonBenet Ramsey resulted in the publication of several books such as; ‘Death of a Little Princess: the tragic story of the killing of JonBenet Ramsey’ by Carol Smith in 1997. ‘Presumed guilty: an Investigation into the JonBenet Ramsey case, the media, and the culture of pornography’ in 1999 by Stephen Singular.

Other publications included:, ‘An Evening with JonBenet Ramsey.’ By Walter A. Davis, ‘JonBenet: The Police files’ by Don Gentile and David Wright in 2003. There was also, ‘Foreign Faction: who Kidnapped JonBenet?’ by A. James Kolar in 2012. Not forgetting, ‘We Have Your Daughter: The Unsolved Murder of JonBenet Ramsey Twenty Years Later’ by Paula Woodward in 2016.