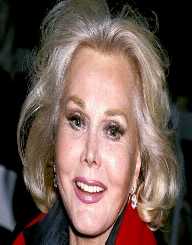 Jolie Gabor was born Janka Tilleman on the 30 September 1896 in Budapest, Hungary. She was the daughter of Chawe Feige Reinharz and Jona Hersch Tilleman. Her family was Jewish.

Jolie Gabor was sent to a finishing school in Switzerland.

Jolie Gabor had aspirations to be an actress but instead under pressure from her parents settled down and married. Her husband was Vilmos Gabor, a much older man. The marriage was not a success, and they agreed to separate after six months. She wanted to be an actress, but because she was pregnant with her first child, Magda Gabor, she opened a jewelry shop instead. Because of the birth of her daughter Magda, she postponed divorcing her husband, and the marriage continued, producing two more daughters, Zsa Zsa and Eva.

During the 1930s Gabor had some shops in Budapest selling crystal, porcelain and costume jewelry. The arrival of Nazism led Gabor to close her stores and eventually the family fled to Portugal. Her mother and brother Sebastian remained behind and finally spent time in labor camps until they were both killed in a bombing raid during World War II.

Zsa Zsa Gabor moved to New York in the 1940s. She married Conrad Hilton, a member of the family who owned the Hilton Hotel Chain. In time she invited her mother to come and live with her in the United States. Gabor divorced her husband and arrived in New York with a hundred dollars to her name. But her new son-in-law helped her established a costume-jewelry shop on Madison Avenue which was successful and for the rest of her life she was an American socialite and businesswoman.

Gabor’s first marriage was to Vilmos Gabor (m.1913-div.1939). She then briefly married Howard Christman (m.1947-div.1948) before marrying Odon Szigethy in 1957. Gabor had known Szigethy in Budapest, and when he arrived in New York, they got married. They remained until his death in 1989.

Gabor died on the1 April 1997 in Palm Springs, California in her hundredth year.