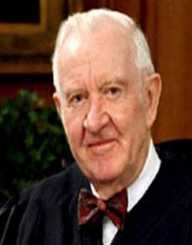 John Paul Stevens was born on April 20, 1920. He is an American lawyer and jurist. He once served as an Associate Justice of the United States Supreme Court. He is currently ninety eight years old.

John Paul Stevens was born on April 20, 1920, in Hyde Park in Chicago. He was born into a wealthy family. He was born to Ernest James Stevens who was a lawyer and hotelier and Elizabeth Maude who was a high school English teacher. He was brought up alongside three siblings. He attended the University of Chicago Laboratory School. In 1941, he graduated with a Bachelor of Arts Degree in English from the University of Chicago. While in college, he was a member of the Omega Chapter of Psi Upsilon.

After graduation, he began his Master’s program in English at the University. Before he finished his Master’s Degree, he joined the United States Navy. In 1942, he became an intelligence officer in the Pacific Theater until 1945. In 1943, his team downed the Japanese Admiral Isoroku Yamamoto’s plane. He received the Bronze Star for that achievement.

In 1947, John Paul Stevens became a clerk to Justice Wiley Rutledge until 1948. He later returned to Chicago where he joined the firm of Poppenhusen, Johnston, Thompson, and Raymond. In 1949, he was admitted to the bar. In 1951, he went to Washington DC where he became an associate counsel to the Subcommittee on the Study of Monopoly Power of the Judiciary Committee of the United States House of Representatives.

In 1952, he moved back to Chicago, where he formed the firm, Rothschild, Stevens, Barry, and Myers together with his friends. John specialized in antitrust cases. In 1953, he became a member of the Attorney General’s National Committee to Study Antitrust Laws, a post he held up to 1955. In 1969, he was a special prosecutor for the Greenberg Commission. In 1970, he was appointed the vice president of the Chicago Bar Association. In the same year, he was selected as a Judge of the United States Court of Appeal for the Seventh Circuit by President Richard Nixon.

In 1975, John Paul Stevens was nominated by President Gerald Ford as an Associate Justice of the Supreme Court. In 1994, he became the Senior Associate Justice of the United States Supreme Court. In 2008, he was elected a Fellow of the American Academy of Arts and Sciences. The following year, he administered the oath of office to Vice President Joe Biden.

In 1942, John Paul Stevens married Elizabeth Jane Shereen, but they divorced in 1979. In 1979, he married Mayan Mulholland Simon. They remained married until 2015 when Simon passed away. He has four children John who died in 1996, Susan, Elizabeth, and Kathryn. He is a Protestant. He is currently ninety eight years old.