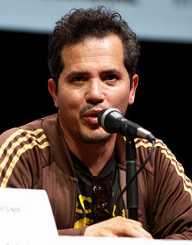 Actor and comedian John Leguizamo was born on the 22 July 1964 in Bogota, Colombia. His family immigrated to the United States when he was four years old, and he grew up in Queens, New York. His parents divorced when Leguizamo was fourteen. When he ran into trouble with the law as a young teenager truancy and other minor issues, his parents sent back to Colombia for a year.

Upon his return to New York, Leguizamo enrolled at an acting school and later attended New York University (1991) but left without graduating.

During the 1980s John Leguizamo did stand-up in comedy clubs around New York. Then in the late 1980s, he started getting small film and television roles including Casualties of War (1989), Die Hard II (1980) and Regarding Henry (1991). His breakthrough role was in Hanging with the Homeboys (1991). He appeared in Whispers in the Dark (1992) and in 1992 played Luigi in Super Mario Bros. the film which was based on the popular video game.

Leguizamo went on to appear in many films including Baz Luhrmann's Romeo and Juliet (1996) playing the role of Tybalt Capulet. He won the part of French Impressionist Toulouse-Lautrec in Moulin Rouge! (2001) which starred Nicole Kidman.

Leguizamo did comedy theatre using theatre to highlight Latino stereotypes in Mambo Mouth (1991). This show won some awards and was met with acclaim. He followed it up in 1992 with Spic-O-Rama. Leguizamo went on a national tour John Leguizamo Live and used the experience for a stage show Sexaholix...A Love Story (2001). He appeared in A MidSummer’s Night Dream at the New York Shakespeare Festival.

Leguizamo was nominated for a 1996 Golden Globe for Best Performance by an Actor in a Supporting Role in a Motion Picture for To Wong Foo Thanks for Everything, Julie Newmar (1995). After that, he went on to win many other nominations including a Primetime Emmy in 1999 for Outstanding Performance in a Variety or Music Program for Freak (1998) for which he won the Emmy. Leguizamo has been nominated for six Alma Awards and won four. He won four Fangoria Chainsaw Awards and in 2004 won the Norman Lear Writer’s Award.

John Leguizamo is married to Justine Maurer, and they have two children.

He published a memoir in 2006 entitled Pimps, Hos, Playa, Hatas and All The Rest of My Hollywood Friends: My Life

John Leguizamo was raised in the Catholic faith.