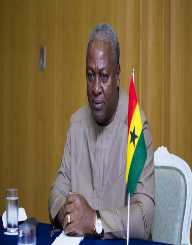 John Dramani Mahama was born on 29 November 1958 in Damongo, Northern region of Ghana. His father Emmanuel Adama Mahama was a rice farmer and teacher, who later became one of the first Member of Parliament for the West Gonja constituency and the first Regional Commissioner under Ghana's first president. John was the first president who was born after Ghana declared independence.

John Dramani Mahama studied in Achimota School and then in Ghana Secondary School. He graduated from University of Ghana in 1981, with a bachelor's degree in history. He continued to study for a postgraduate diploma in communication studies, earning it in 1986. Two years later, he obtained a postgraduate degree in social psychology, from Institute of Social Sciences in Moscow, in the Soviet Union.

John is reported to be able to speak English, and Ghanaian dialects for Akan people (Twi and Fante), Ga, Gonja, Dagbani. He could also speak Ewe and Hausa moderately well.

While studying for his postgraduate diploma, John Dramani Mahama was a history teacher at a secondary school level. After returning from Moscow, John worked at Embassy of Japan, based in Accra between 91 and 95. He was the Information, Culture and Research Officer. From 1996, he transferred to a non- governmental organization: Plan International, and worked at the Ghana Country Office, where he was the  International Relations, Sponsorship Communications, and Grants Manager.

John Dramani Mahama was a member of the National Democratic Congress (NDC), and considered himself a defender for the underprivileged, earning himself the first role in politics, where he was a representative of Bole/Bamboi Constituency in 1996 for three terms. He added Deputy Minister of Communications into his resume the next year. In 1998, he was promoted to Minister of Communications until 2001, when the New Patriotic Party won the election.

In 2000, John helped the founding of Ghana AIDS Commision, and he was part of the Publicity Committee that re-introduced Value Added Tax (VAT). John was then appointed as the Minority Parliamentary Spokesman for Communications, shadowing the ruling party’s minister of communications in the year 2001. The next year, he was made Director of Communications for the NDC.

In 2003, John Dramani Mahama joined the pan-African parliament, where he was made the Chairperson for the West-African Caucus until 2011. John was elected as the Minority Spokesman for Foreign Affairs in 2005 after opposition won the election in 2004. NDC won the next election, and he was elected as Vice- President in 2009. John was passionate about his role and serving the people, particularly in farming and education. He was the Chairman of the National Economic Management Team, the Decentralisation and Implementation Committee, and many more.

When the standing president, John Atta Mills passed away on 24 July 2012, John Dramani Mahama was made president under Ghanaian law. He then wins the 2012 Election, despite the opposition challenging the results. After eight months of hearing, the petition was dismissed by nine justices of the Supreme Court of Ghana, by the majority opinion. John was sworn in January 2013. While working as president, he joined Economic Community of West African States and chaired a trade committee started by the African Union.

In 2016, John and NDC party lost the presidency to NPP’s Nana Akufo-Addo. John is the first and remains the only person to serve in the politics as a Ghanaian and Pan-African member of parliament, deputy minister, minister, vice president, and president.

When John Dramani Mahama was in politics, John wrote for newspapers and other publications. He wrote Mahama’s Hammer in the Ghanaian paper, featured a semi- regularly. John wrote My First Coup d'État and Other True Stories from the Lost Decades of Africa, talking about his passion for Afrobeat and Fela Kuti.

John's essays were featured in Huffington Posts, The New York Times and many more. He also appeared as a TED speaker at the TEDx Great Pacific Garbage Patch Conference in Santa Monica.

John Dramani Mahama married Lordina Effah, whom he met during secondary school. The couple has seven children together. John has other children born out of wedlock.

John Dramani Mahama was born into a Presbyterian Christian family; he later converted to become a member of the Assemblies of God, through marriage.

John Dramani Mahama has an honorary doctorate in Public Administration, awarded by the Ekiti State University in Nigeria. He was awarded with Africa Award in 2013, for his contributions in Food Security and Poverty Reduction, presented by the Forum for Agricultural Research in Africa.