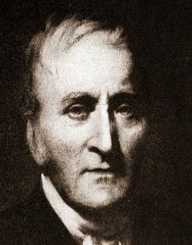 John Dalton was an English scientist, best known for researching color blindness and for developing the atomic theory.

John Dalton was born in the community of Eaglesfield, England, on September 6, 1766. His family was Quaker. His father worked as a weaver, earning little money. Because of that, he could not afford a proper education. He was taught by his father and by John Fletcher, a fellow Quaker who owned a school in the nearby village. He started working on a farm at a young age to help support the family.

John Dalton started teaching at the Quaker school in Cumberland when he was just 12 years old. At the age of 15, he and his brother started running another Quaker school in Kendal. Four years later, he was appointed as the principal. In 1793, he began teaching natural philosophy and mathematics at the New College in Manchester. It was a dissenting academy – a school made for those who could not attend regular universities because they were not aligned with the Church of England. He remained there for seven years. He quit the job because of the bad financial situation of the institution, and he became a private tutor.

John Dalton began his meteorological diary at the age of 21. He kept writing in it until the day he died.  He published some of his observations in 1793 as Meteorological Observations and Essays. He also soon invented a new way to measure the height of mountains. He did this by using a barometer, an instrument for measuring atmospheric pressure.

Dalton suffered from color blindness, seeing everything in yellow. His brother also had the illness. So, he concluded that it must be hereditary. He did some research on it, believing that it was caused by a malfunction in the liquid in the eyeball. In 1794, he published a paper called “Extraordinary Facts Relating to the Vision of Colours.” His theory was later disproved, but in his honor, color blindness is still sometimes called Daltonism.

In 1801, John Dalton published a series called “Experimental Essays.” He talked about pressure, steam, evaporation, and the thermal expansion of gases. In 1805, he published “On the Absorption of Gases by Water and Other Liquids,” which contained what is now known as Dalton’s law of partial pressures. It states that in a mixture, the partial pressures of each gas sum up to form the total pressure. He continued writing throughout the years, publishing different papers on topics like rain, heat, light, etc.

Dalton’s most important work is related to the atomic theory. It states that every element is made of small particles called atoms which cannot be further divided and are combined to form different substances. This theory was one of the most important breakthroughs in modern chemistry.

John Dalton suffered minor strokes which damaged his speech in 1837 and 1838. They continued again in 1844. He passed away on July 27, 1844, in his home. His coffin was put up in the Manchester Town Hall for four days, during which more than 40000 people visited him. He was finally buried at the Ardwick cemetery. Many prominent figures from the city attended his funeral.