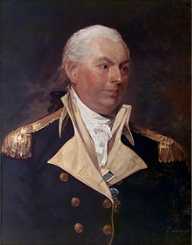 John Barry, often regarded as the Father of the American Navy, was born on March 25, 1745, in Tacumshane, County Wexford, Ireland. His father was a poor tenant farmer. The British landlord later evicted his family from their humble abode of a thatched cottage. The helpless family relocated to a village called Rosslare on the southeastern coast of Ireland.

Nicholas Barry, a resident of Rosslare, happened to be the uncle of John. Nicholas worked as a Captain of a fishing boat. John followed his uncle and began working as a cabin boy of his uncle’s fishing vessel. He grew up working as a seaman and gradually picked up the essentials to become a highly-skilled Mate.

His 6’4” tall, muscular structure enhanced his features and gave him an imposing presence on board as an able seaman. During his younger days, he heard about the massacre of around 3000 residents of Wexford in 1649 by the marauding forces of Oliver Cromwell. This incident had a grave impact on his mind, and he developed a lifelong hatred and enmity towards the British.

After having worked as a seaman throughout his younghood, John Barry settled in Philadelphia, Pennsylvania, the United States of America in 1760. He led a successful maritime career as a Captain of many merchant ships of different shipping houses until the breaking of the American Revolutionary War in 1775. On the backdrop of this war, Continental Congress commissioned its first warship, the USS Lexington on December 7, 1775.

On March 14, 1776, John Barry received the official naval commission as Captain of the warship due to his expertise and popularity as a worthy and highly-skilled seaman. He soon justified the responsibility entrusted to him by capturing a well-armed British tender H.M.S. Edward after a short and swift engagement. Besides, he was able to give safe passage to several merchant ships.

Additionally, he was successful in evading a powerful British Squadron. As his popularity as a naval officer grew by leaps and bounds, he received the command of a yet-to-be-built new 36-gun frigate Effingham as his new assignment in place of the previous 14-gun USS Lexington.  While the frigate was being built in Philadelphia, John voluntarily opted to serve the army.

THE HEROICS OF JOHN BARRY

John Barry's first assignment in the army was working as ADC (aide-de-camp) to General John Cadwalader. Cadwalader was one of the owners of a merchant shipping company for whom John Barry had worked before his American Navy career. Consequently, he took part in the Princeton and Trenton operations. In 1777, British forces captured the Philadelphia port. Effingham was not yet ready, and it was essential to scuttle the frigate.

John commanded a mixture of small crafts, including barges, rowboats, longboats, and gunboats in the Delaware River. On March 8, 1778, John attacked a British fleet with his flotilla of such small crafts and captured two-armed sloops and an armed schooner. Moreover, he successfully blocked and disrupted British supply and communication line by compounding several British vessels and supplies.

In a direct fight between the Unicorn and Raleigh, the latter arrived at the mouth of the Penobscot River. The foretopmast of the ship had cracked, and it was unfamiliar territory for the crew of the ship. John fought gallantly, saved two-thirds of his team, and ran aground the frigate so that the British army could not lay their hands on it.

THE MEMORABLE WAR OF HIS LIFE

The eventful naval career of John Barry added another feather in his cap when he confronted two British ships onboard his 36-gun frigate Alliance on May 28, 1781. The encounter took place off the coast of Newfoundland.

Unfortunately, Alliance became a sitting duck due to lack of wind on its sail and could not move any further. Both the British ships inflicted massive damage to the Alliance. While John was fighting vigorously from the quarterdeck of his craft, a projectile of canister shot struck him on his left shoulder. A profusely bleeding John was taken to the cockpit for medical care. The wounded Captain, however, refused to surrender and inspired his deputy to continue the fight.

As luck would have it, a sudden gust of wind filled the sails of the ship and made the vessel movable. With renewed vigor, all the crew of the vessel began their fight against the two British ships. An ensuing grueling battle of around four hours took its toll. Both the British ships had to surrender after suffering heavy casualties.

On March 6, 1801, John Barry retired from his active duty. He died on September 12, 1803, after suffering from the complications of asthma. He served as the head of the American Navy until his last breath. His burial took place on September 14, 1803, with full military honors. His mortal remains were entombed in the Old St. Mary's Churchyard of Philadelphia. He forever remained as an epitome of gallantry in the annals of American Naval History.