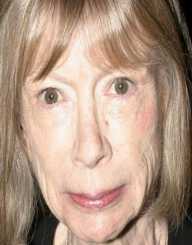 Joan Didion is an American author and journalist.

Joan Didion was born in the city of Sacramento, California, on December 5, 1934. Her father was called Frank, and her mother was called Eduene. Because of her father’s job in the U. S. Army, the family moved around a lot. In 1956, she graduated with a degree in English from the University of California, Berkeley.

During her last year at university, Joan Didion won the first prize in an essay contest started by Vogue magazine. She got a job there as a research assistant and copywriter. She stayed at Vogue for seven years, and she worked her way up to associate feature editor.

In 1963, Didion published her first novel, called Run, River. It described the life of a married couple, as well as the history of California. Five years later, she published a collection of magazine columns she had written, called Slouching Towards Bethlehem. In them, she mostly described her experiences while living in California.

In 1970, Joan Didion published her second novel, Play It As It Lays. Two years later, it was adapted into a film. In 1977, she released the novel A Book of Common Prayer. It showcased the tragedies in a fictional Central American country called Boca Grande. In 1984, she published Democracy, a story about the love affair between a wealthy heiress and a CIA officer during the Cold War. Twelve years later, she wrote the thriller The Last Thing He Wanted.

In 1979, Didion released her second collection of magazine articles, called The White Album. In 1983, she wrote the long essay Salvador, based on her visit to the country of El Salvador. In 1987, she published the book Miami, exploring the Cuban community living in the city. She later published the book Henry, dedicated to her late friend Henry Robbins. She wrote about the presidential elections of 2000 in the book Political Fictions.

In 2005, Joan Didion published The Year of Magical Thinking, describing her reaction to her husband’s death. The next year, she released We Tell Ourselves Stories in Order to Live, a collection of much of her previous work. In 2011, she published her memoir, called Blue Nights. She talked about her daughter’s death and about getting older.

Apart from essays and novels, Didion also wrote screenplays. She wrote the screenplay for the film adaptation of her novel Play It As It Lays in 1972. She also worked on the films Panic in Needle Park, A Star Is Born, True Confessions, and Up Close and Personal.

Joan Didion received the National Book Award for Nonfiction for the memoir she wrote after her husband’s death. She also won the St. Louis Literary Award and the Medal for Distinguished Contribution to American Letters. She got honorary doctorates from Harvard University and Yale University. In 2013, she was the recipient of the National Medal of the Arts.

Griffin Dunne, her nephew, made a documentary called Joan Didion: The Center Will Not Hold. It was released on Netflix in 2017.