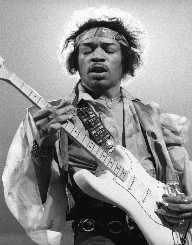 Jimi Hendrix was born on November 27, 1942, in Seattle, Washington. His parents married in 1942, and only after three days of marriage, his father had to leave to start basic training for U.S. Army service in the World War II. Jimi was first of five of his parent’s children.

The first three years of his life, Hendrix’ father was away, and he was cared for by family members and friends. After the war, both of his parents struggled with alcoholism and his father was not able to find work. His parents gave their children away to foster care. They divorced when Hendrix was nine years old, and his father was granted custody. Hendrix mother died in 1958, and he only saw her on a couple of occasions.

As a child, Jimi Hendrix was very sensitive, and all his experiences deeply affected him. Music became a way for Hendrix to escape his problems. He enjoyed blues and rock and roll. His father encouraged him to learn to play the guitar. He learned on his own, and when Hendrix was 16, his father gave him his first acoustic guitar. The following year, he got an electric guitar. Hendrix formed a band the Rocking Kings and started to perform. He dropped out of High School in 1959 and worked several jobs to support his dream of becoming a musician.

In 1961 Hendrix enlisted in the United States Army. While he was at the training, he managed to find time for music and founded a band King Kasuals. Hendrix injured himself during a parachute jump and was discharged in 1962. After he left the army, Hendrix began to work as a backup musician Jimmy James. He worked with performers such as Little Richard, B.B. King and Sam Cooke. After working as a backup player, in 1965 Hendrix once again formed his band. The Jimmy James and the Blue Flames played gigs in New York Greenwich Village neighborhood.

In 1966, Jimi Hendrix met a bass player from the British rock group the Animals, Chas Chandler. He was impressed by Hendrix work and signed him, becoming his manager. Chandler convinced Hendrix to come to London. In London, Hendrix met Noel Redding and drummer Mitch Mitchell and formed the Jimi Hendrix Experience.

The group performed in England and soon after gained recognition. Amongst his followers were many of the country’s rock royalty- The Beatles, the Rolling Stones, and the Who. Hendrix was praised for his stage appearance, and on some occasions, it almost seemed like he is playing with no hands. The Jimi Hendrix Experience released their first single “Hey Joe” in 1967. The single was an instant hit and was followed by the release of other singles, like “Purple Haze” and “The Wind Cries Mary.” The band released their first album Are You Experienced? The same year. Hendrix became popular for his extraordinary guitar playing skills and the innovative and experimental sound. One of the brightest moments in his early success what at the Monterey Pop Festival, when at the end of the show, Hendrix lit his guitar on fire.

Jimi Hendrix became a superstar after the release of his first album. At the end of 1967, he released the second album Bold As Love. The following year, the band released Electric Ladyland which was the last album with Jimi Hendrix Experience. The band toured until their split in 1969.

1969 was also marked by a legendary music event when Hendrix performed in the Woodstock Festival. He was the last performer in the three-day festival. By this time, Hendrix also had his recording studio Electric Lady, where he worked with several performers experimenting with different songs and sounds. In 1969, Hendrix formed a new band- Band of Gypsys with his friend from army Billy Cox and drummer Buddy Miles. The band did not take off, and Hendrix began to work on a new album, which he never completed.

Jimi Hendrix had a long-standing problem with drug and alcohol abuse. He first tried LSD in 1966, but before that, he had sporadically taken several other types of drugs. After 1967, he regularly started to smoke cannabis and hashish and used LSD and amphetamines.

When he drank too much, Hendrix often became violent, especially when he mixed drugs with alcohol. One of these occasions was in 1969 when his house was a robber, and Hendrix punched his friend Paul Caruso and accused him of theft. Just a few days later, his girlfriend was in the hospital and required stitches after he hit her with a vodka bottle.
Hendrix spent the last moths of his life in London with Monika Dannemann. On his last day of life, the evening started with the two drinking a bottle of wine. She drove him to a friend’s place later and picked up after several hours. The two stayed up talking for several hours, and the next day, when she woke up, she found that Hendrix is not breathing. Hendrix was pronounced dead in the hospital at 12:45 p.m. on September 18, 1970. Post-mortem examination concluded that Hendrix aspirated his vomit and died of asphyxia, while intoxicated with barbiturates. Dannemann later confirmed that Hendrix took nine of her Vesparax sleeping tablets, which was 18 times the recommended dosage. Hendrix was interred at Greenwood Cemetery in Renton, Washington.