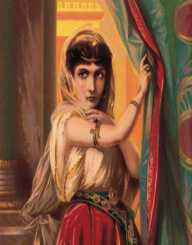 Jezebel also famously called Queen Jezebel is one of the Biblical figures that get her description in the Book of Kings. Jezebel who is the daughter of Ithooball of Sidon becomes the wife of the Israeli prince Ahab. However, they later become rulers of Israel as King and Queen. According to the details of the Bible, she manipulates Ahab to allow the worship of Baal and Asheran. Therefore, the people had no choice but to abandon their faith in Yahweh at the pain of death.

Jezebel even goes ahead to have one of Yahweh faithful servants killed to help her husband grab Naboth’s land. Also, she made sure that the prophets of God were dead. Her actions angered God, thereby Jezebel incurred the full wrath of Yahweh. Consequently, she lost her power, and her servants threw her out of a window. Later her body is run over by horses and the then eaten by wild dogs. Biblically she is the focus of teaching of morality.

Jezebel was a Phoenician princess and also the daughter of King of Tyre Ethbaal. She got married to the prince of Israel, Ahab, son of King Omri. Ahab was at the time one of the rulers of Northern Israel. The marriage was a sign of th good diplomatic relations that Israel was at the time enjoying with Phoenicia. Moreover, just like the many wives of King Solomon, Jezebel also made sure she had her place of worship. Therefore, her husband built her an altar of Baal in their capital Samaria.

Israel was having a lot of problems due to the divisions of its tribes. Therefore, when the new King Omri came into power, he took the opportunity to cement proper diplomatic relations with Phoenicia in the North. So, he wed his son prince Ahab to his friend's daughter Jezebel. Later, Princess Jezebel became Queen of Israel. Since Israel was a one God nation, Jezebel made a lot of enemies’ easily.

This is because she was worshipping from a different altar to the rest of the people. She was a worshipper of Baal and other gods. Also, she took it upon herself to bring many Baal prophets to Israel. Moreover, she ordered the death of all Yahweh prophets. Elijah who was also a prophet of Yahweh came to. He predicted that Israel would be hit by a long horrible draught that would spread through the lands of Jezebel. All of Elijah’s prediction came to pass with essential details.

There was a general decline in the love of Yahweh during the reign of Queen Jezebel. Moreover, most the prophets of Yahweh that could have helped spread his message got killed by the Queen. Furthermore, the worship of Baal was made mandatory for all citizens without exception. However, the remaining Yahweh’s prophets went into hiding afraid of meeting the executioners. So, God sent Elijah to tussle with the increasing worship of Baal.

So, he dealt out a challenge to the prophets of Baal to test their powers before the people. Elijah had the aim of disapproving the validity of the power of the false gods. After achieving his goal, Elijah gave the people around the order to arrest the false prophets. Later he then told them to slay all the false prophets of Baal and embrace the one true God. However, he also had to flee because the Queen wanted to retaliate against his actions. So, he went to live in the wilderness.

Naboth was one of the Israeli citizens. Also, he was a faithful servant of Yahweh, and he had a beautiful vineyard. Naboth’s vineyard was the envy of many people even King Ahab. So, the King made Naboth a generous offer, but Naboth was not willing to part with his ancestral land. Therefore, he said no to the King, a fact that did not sit well with Ahab. So, Jezebel upon noticing the grief her husband had, she took the matter in her own hands. She and some elders made sure they could arrest Naboth. So they accused him of worshipping Yahweh. Therefore, they stoned him to death. After that, Ahab took the possession of Naboth’s vineyard. So, Elijah made another prophecy of Ahab’s death and his lineage. He also said that Jezebel would die and stray dogs would eat her flesh.

In just a matter of three years, Elijah's prophecies came to pass. So, the first one to fall was Ahab in battle. The son of Ahab Ahaziah who was to inherit power also died shortly after from accidental death. So, the remaining brother Joram took the reins of power. At the time Elijah had left, and Elisha was in charge. So, he told one of his followers to anoint Jehu as King. Jehu was the commander of Jorams army.

Consequently, to ensure his rein, Jehu killed all the descendants of Ahab including Joram. The Queen mother was thrown out of a window while attempting to gain the favor of the new King. Some say she had taken the time to dress in fineries and to seduce the new king. However, all failed, her servants threw her out of the window. Also, horses rode over her, and stray dogs had their fill from her dead flesh. All of Elijahs prophecies came to pass and this brought the faith in Yaweh back to Israel.