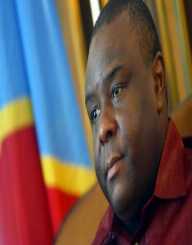 Congolese politician Jean-Pierre Bemba was born on the 4 November 1962 in Nord-Ubangi in the Democratic Republic of the Congo. His father was Jeannot Bemba Saolona. He had two siblings Jean-Jacques Bemba and Catherine Bemba. Bemba’s mother died when he was twelve years old.

Bemba as educated at the ICHEC Brussels Management School.

Bemba was a vice-president in the transitional DRC government (2003–2006), while his top military commanders, Brigadier General Malik Kijenge and Major General Dieudonné Amuli Bahiigwa, were made chiefs of the Armed Forces of the Democratic Republic of Congo (FARDC).

Bemba ran in the Congolese presidential election on the 20 July 2006. He received a lot of support in the Lingala-speaking western region of the country which includes Kinshasa, the capital. There was tension surrounding the election; Bemba won 20% of the vote. Kabila gained 44%. An assassination attempt was made on Bemba’s life on the 21 August 2006 when the Presidential Guard bombed his home in Gombe. A further round of voting was held on the 29 October, and Kabila emerged with 58.05% of the vote.

Bemba’s side immediately said that the result was fraudulent. The Supreme Court rejected these claims on the 27 November 2006 and Kabila was appointed President. Bemba then came out and declared that the court decision was wrong and that he would participate in the opposition. Bemba ran for a Senate seat on the 8 December and won the place in the January 2007 election.

In March 2007 a further assassination attempt was made on Bemba’s life. Rioting and fighting started near his home in which both civilians and soldiers died. Bemba called for a ceasefire and stayed in the South African embassy. A warrant was then issued for Bemba’s arrest with the accusation of high treason. As a senator he had immunity, but the chief prosecutor indicated that he could ask parliament to have the immunity removed.

Bemba then planned to travel to Europe for medical treatment, and the Senate approved the trip for sixty days on the condition that he was going to medical treatment, not going into exile. He flew to Portugal with his wife and children. On the 12 April, the attorney general announced that he had requested the Senate to remove Bemba’s political immunity as a senator. Bemba’s party the MLC suspended participation in the National Assembly on the 13 April, citing intimidation. Meanwhile, Bemba stayed in Europe and claimed that he was forced into exile and that his country was about to turn into a dictatorship.

According to the International Criminal Court, Bemba as found guilty on the 21 March 2016 for crimes against Humanity, murder, and rape as well as three counts of war crimes, murder, rape, and pillaging. He was sentenced on the 21 June 2016 to 18 years imprisonment. The crimes were carried out by a contingent of the Mouvement de Libération du Congo (MLA). As Bemba was the military commander with authority and control over the forces that committed the crimes, he was held responsible. The crimes were committed in and around the 26 October 2002 and the 15 March 2003.