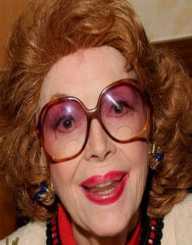 Jayne Meadows was an actress and a television personality best remembered for featuring in the movie, I've Got a Secret between 1952 and 1959. She was nominated three times for the Emmy Awards.

She had three siblings, two brothers and one sister who were also an acting industry. The family lived in Sharon, Connecticut where her father was working.

Jayne Meadows spent the better part of her early life in China before returning to the United States with her parents. Meadows was a funny and intelligent character. She was a versatile actor who featured in both comedic and dramatic roles.

She started her acting career at a relatively young age, her Broadway debut coming in 1941 when she appeared in Spring Again. Two years after her debut, Meadows landed on another role in a comedy series Another Love Story.

At the age of 31, she became a panelist of the favorite television show I've Got a Secret. During that time she was steering Medical Center, a dramatic television series.

Jayne Meadows' first appearance on a big stage was in 1946 when she appeared in film Undercurrent. She steered the film together with Robert Mitchum and Katharine Hepburn. One year later she featured in Lady in the Lake, which was her first appearance with her long-term film partner Robert Montgomery.

After appearing in The Song of the Thin Man, she made a number of records with her sister as Meadows Sisters. In the late 1950s, Meadows made a number of guest appearances in The Tonight Show; a show steered by Allen.

Jayne Meadows showed the dramatic part of her character in the 1960s. She featured in the television series Medical Center with Chad Everett and James Daly. In 1970, she won a nomination for an Emma Award for her work Meeting of Minds. Her husband was responsible for the work.

In her show Meadow interviewed her various celebrities including Marie Antoinette, Plato, and Thomas Jefferson.

Jayne Meadows married actor Steve Allen in 1954. The two had a long professional relationship before their marriage. The couple had one son together, Bill. Her husband, however, had three children from his previous marriage.

The couple had different political stands. Steve Allen was a Democrat while Meadows was an active member of the Republican Party.

Her husband passed away later in 2000 from a complication that occurred from a car accident. After the loss, Meadows lived a quiet life with her son William "Bill" Allen.

Jayne Meadows lived an active life until 2009 when she fell and her fractured her hip. She made the last appearance on television August 2009 on a ceremony held to commemorate former television stars.

Jayne Meadows died on 26th April 2015 at her home in California at the age of 95. She died of natural causes. Her grave is next to her husband's grave in Forest Lawn Memorial Park.