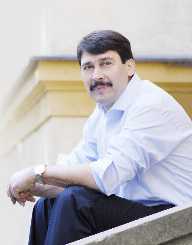 János Áder is the fifth President of Hungary; he has been re-elected as President again in 2017.

János Áder is the oldest child of parents Terézia Szabó and János Áder. His mother worked in a healthcare company, while his father was the assistant manager at a store. He has a younger sister: Annamária Áder.

János Áder went to Révai Miklós Secondary School in the city of Gy?r and graduated in 1977. The following year, he studied law at Eötvös Loránd University in Budapest, receiving his bachelor’s degree in 1983.

János ÁderHe had to work at night, while studying during the day, to pay for University after the sudden illness and death his father.

János Áder became a research fellow at the Hungarian Academy of Sciences' Sociological Research Institute, starting from 1986 for four years, focusing on the legislative process in the Hungarian National Assembly.

János Áder attended the historic 1987 Lakitelek-meeting, it was a meeting of political dissidents took place on 27 September 1987, ending with the official formation of the Hungarian Democratic Forum (MDF).

In 1988 János Áder was one of the first members of the political party Fidesz – Magyar Polgári Szövetségin (Alliance of Young Democrats) in April. He was the legal expert for the part and was the part of the Opposition Round Table.

The opposition managed to negotiate an end to single-party rule in Hungary in 1989.

JJános Áder was part of the team to draft the legislation that changed the role of the Hungarian electoral laws; it was the first step to present its judicial independence before the European Court of Justice.

János Áder also lead Hungary to join the defensive alliance of NATO around 2002, helping to prepare Hungary’s accession to the European Union.

He was then elected Member of the European Parliament (MEP) in 2009; he was also chosen as Vice-Chair of the Committee on the Environment, Public Health, and Food Safety.

Dr. János Áder became the new President of Hungary after the resignation of Pál Schmitt on 16 April 2012. A majority voted János and assumed office in May 2012. He was the first president since the new constitution on January the same year.

Under his presidency, Hungary was the first in the EU to ratify the Paris deal and has taken active part inUN’s Friends of Water working group. Dr. János Áder is particularly concerned about how climate change and water supply affects the Hungarian people.

János Áder had also apologized to the national parliament in June 2013, to Serbia for Hungarian’s war crimes against them in Vojvodina during the Second World War.

János ÁderJános was re-elected for another five-year term as president in 2017.

Dr. János Áder met his wife Judge Anita Herczegh in Eötvös Loránd University; he was graduating when she started the first year.

They married in 1984, and while János Áder was a fellow at the Institute for Sociology of the Hungarian Academy of Sciences, the pair farmed on land near Csorna. The couple has four children together.