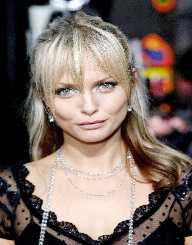 Born on June 4, 1970, Izabella Scorupco is one of the known Polish-Swedish actress, model, and singer. Scorupsco showed her interest in acting and act works from children, and that interest became her career. Playing roles in several films, Izabella Scorupco became famous in her role as Bond girl Natalya Simonova in James Bond film, GoldenEye in 1995.

Izabella Scorupco started working as a model and in the late 1980s and travelled extensively throughout Europe. During this period, she appeared on the cover of Vague magazine and also did some television commercials. Her work caught the attention of Staffan Hilderbrand who discovered her in 1987 to starred in the film, Ingen kanalska som vi (Nobody can love like us). This made gained her fame-making her a teen idol. Having an interest in music since childhood,Izabella Scorupco tried her hands on music with the release of the single Substitute in 1989. The song became famous charting number three in Sweden and reaching the gold status.

Izabella Scorupco then came out with the album IZA in the 1990s. The album was popular and by 1991, it was certified gold in Sweden. Pursuing acting and music concurrently, she featured in the miniseries V som IVi king in 1991 where she played as a single mother. After her first marriage, she moved to the United States of America where she was offered her famous role in GoldenEye as Natalya Simonova in 1995.

Izabella Scorupco went into hiatus after having her first child until 1999 when she starred in With Fire and Sword. This film became one of the biggest productions ever to be made in Poland. With her popularity, the cosmetic company, Oriflame appointed her as its spokesperson. This also increased her mileage and popularity grew. Izabella Scorupco rocked on her popularity to gain a role in Dykaren and Vertical Limit and 2000. In 2002, Izabella Scorupco starred in the thriller Reign of Fire alongside McConaughey and Christian Bale, which was nominated for at Saturn for Best Fantasy Film. Izabella Scorupco, featured in several other films Exorcist: The Beginning, Alias, Cougar Club and Solstorm.

Izabella Scorupco after a long break from music relaunch her career with a duet with Swedish musician Peter Joback in the single Jag Har Dig Nu in 2011. She was also visible in the song’s music video. That aside, she featured in Joback’s short film La Vie, L’amour, La Mort. In 2012, she hosted the series Sweden’s Next Top Model just for a season. In 2013, she was played a role in the romantic comedy, Mickie & Veronica which also featured David Hellenius.

Izabella Scorupco was married to Polish ice hockey player Mariusz Czerkawski on On December 25, 1996. The couple had a daughter, Julia but divorced in1998. She is now married to Jeffrey Raymond since January 30, 2003. They couple currently live in Los Angeles and New York City and have a son, Jacob.