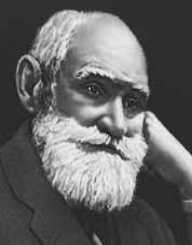 Ivan Petrovich Pavlov was a renowned Russian Physiologist and the first Nobel Laureate from Russia. He is famously known for his work in Classical conditioning and is one of the brightest minds to have graced earth.

Ivan Pavlov was born on the 26th of September, 1849 in Ryazan, Russia. He was born to Peter Dmitrievich Pavlov and his wife, Varvora Ivanova Uspenskaya. Pavlov was the first of eleven children born to the couple. His father was a village Russian orthodox Priest while his mother was actively devoted to keeping the home in good order.

Pavlov grew up with great enthusiasm and was always willing to help with house chores and babysitting of his younger siblings. He thus enjoyed activities such as garden keeping, bicycle riding, rowing, swimming, and gorodki. He was only able to begin formal education at eleven due to the injury he sustained when he fell from a high wall and landed on a stone pavement.

Ivan Pavlov began his education at Ryazan church school, from where he went on to the local theological seminary. He left the academy before graduating to enroll into the University based in St. Petersburg. There he enrolled in the physic and mathematics department of the school, taking courses in Natural science. He showed his academic brilliance while at the university and won a prestigious university award for his first research project on the physiology of the nerves of the pancreas.

He went on to complete his studies and was very outstanding all through his university days. He went ahead to enroll into the Imperial Academy of Medical Surgery and assisted Elias von Cyon, who was his former teacher. He also became a laboratory assistant to Professor Ustimovich at the physiological department of the Veterinary Institute. After this, he was invited by Professor S.P. Botkin to work in his physiological laboratory as the chief of his clinic.

Ivan Pavlov was well versed in carrying out research work on physiology. He graduated from the Medical Military Academy in 1879, bagging a gold medal award for his work on research. He went on to become a fellow of the Academy for his postgraduate work. Now a fellow and also chief of Botkin’s clinic, Pavlov was able to continue carrying out his research work with full effect.

He went ahead to present a thesis on The Centrifugal Nerves of the Heart and in this thesis he opined on the idea of nervism and the basic principles of the trophic function of the nervous system. Through his work with Botkin’s Clinic, he was able to show evidence of basic patterns in the regulation of reflexes present in the activity of organs of the circulatory system.

Ivan Pavlov was greatly influenced to pursue his career choice by D.I Pisarev and I.M Sechenov. Sechenov was a Russian physiologist and was described by Pavlov as the father of physiology. Pisarev, on the other hand, was the literary critique and also an advocate of natural science. Based on their influence, Pavlov left his Orthodox Christian background to pursue a career in Science.

Pavlov studied in Germany and worked in the Heidenhain laboratories in Breslau. He worked with Carl Ludwig and Eimear Kelly. He worked there between 1884 and 1886 and perfected the technique of digestion in dogs, using an exteriorized section. This technique became known as the Heidenhain or Pavlov Pouch.

He returned to Russia in 1886 and was finally appointed as the professor of Pharmacology at the Military Medical Academy in 1890. He held the position for five years. He was then invited to direct the affairs of the Department of Physiology, at the Imperial Institute of Experimental Medicine in 1891. He was very pivotal in making the Institute one of the world’s most important centres of physiological research.

Between 1901 and 1904, Ivan Pavlov was nominated for the Nobel Prize for Physiology and Medicine. He won the award in 1904 in recognition for his work on the physiology of digestion which has transformed and enlarged the knowledge of the vital aspects of the subject.

Though he was supported by the Soviet Government for his research work, Pavlov was always critical of the way the Government carried out its activities and persecution of people back then.

Ivan Pavlov got married to Seraphina Vasiliena Karchevskaya on the 1st of May, 1881. Their marriage was rocky in its initial nine years due to financial problems. Seraphina's first pregnancy ended in miscarriage, while the second brought forth a son, Mirchik, who died in childhood. They would go on to bear four more children, Vladimir, Victor, Vsevolod, and Vera. Vsevolod died in 1835 as a result of pancreatic cancer. Pavlov lived his life as an atheist.

He died on February 27, 1936, aged 86. He died of double pneumonia. While on his deathbed, he asked a student of his to sit beside him and record the circumstances of his death. His aim was so that he could create unique evidence of the subjective experiences that occur during the last stage of life. Even in death, he was a researcher. A great man indeed.