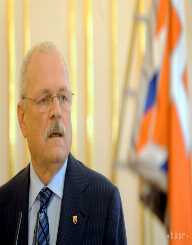 Ivan Gašparovi? is a Slovak politician and lawyer. He was the President of Slovakia from 2004 to 2014 and has a unique distinction of being re-elected to the office of President.

Ivan Gašparovi? was born on 27 March 1941, in the town of Poltár located near Lu?enec, an area in the Banská Bystrica region of south-central Slovakia. The town of Poltár was a part of the first Slovak Republic at the time of his birth. His father Vladimir Gašparovi?, an immigrant from Rijeka, Croatia, had migrated to Czechoslovakia after the end of World War I. Vladimir was a teacher in a secondary school in Bratislava, the present day Slovak capital. Later, he became the Headmaster of the school.

After securing his degree in law, Ivan Gašparovi? joined the Martin District Prosecutors Office and worked there from 1965 to 1966. He was then appointed as a Prosecutor at the Municipal Prosecutor's Office of Bratislava in 1966. He continued the work till 1968. He was briefly associated with the Communist Party of Slovakia in a bid to support the reforms initiated by Alexander Dub?ek. But within a year, by August 1968, he was defenestrated from the party following the Warsaw Pact invasion of Czechoslovakia.

Velvet Revolution saw the fall of the Communist Regime. The newly elected democratic President of Czechoslovakia Václav Havel handpicked Gašparovi? for the post of the country's federal Prosecutor-General. He also became the Vice-President of Czechoslovakia’s Legislative Council in 1992 for a very short duration. In January 1993, the federal state of Czechoslovakia split into two sovereign independent countries, the Czech Republic and Slovakia. Gašparovi? returned to his post at the Law Faculty of Comenius University and served at two Scientific Councils of the University.

In 1992, Ivan Gašparovi? joined the Movement for a Democratic Slovakia (HZDS). Vladimír Me?iar led the formation. In the June 1992 election, HZDS came out victorious. After the victory,  Gašparovi? was appointed as the Speaker of the National Council of the Slovak Republic. He was made the head of an enquiry commission formed by Me?iar to probe into a scandal that involved discovering hidden microphones in the U.S. Consulate in Bratislava. The investigation was inconclusive.

In late 1992, Ivan Gašparovi? was bestowed with the responsibility of drafting the constitution of the newly formed state of Slovakia. From 1998 to 2002, he was part of a parliamentary committee created to monitor the SIS (Slovak Intelligence Service). He was also a member of the Slovak parliamentary delegation to the Inter-Parliamentary Union during the same period.

In July 2002, Ivan Gašparovi? left the HZDS as Me?iar did not nominate him and also some other HZDS members for the upcoming elections. He formed his party HZD (Movement for Democracy) on July 12, 2002. The reason cited by him for the new formation was internal disputes and differences of opinion with the leadership of HZDS. In April 2004, Gašparovi? contested the Presidential election against Me?iar and Eduard Kukan, Presidential candidate of the incumbent coalition government. Though Gašparovi? was not expected to win against Eduard Kukan, it was the issue of ‘lesser evil’ which ultimately became the deciding factor among the electorate favoring him to become victorious at the end.

During his decade-long Presidency, Ivan Gašparovi? became quite popular among the masses due to his non-confrontational style of governance. However, he has often been criticized on two accounts. The first one was his opposition in erecting a sculpture in memory of controversial Hungarian minority politician János Esterházy in Kosice citing Esterházy’s alleged support to Hitler and sympathies to the fascism. On the same lines, he also opposed Ferdinand ?ur?anský's sculpture. The second one was his failure to name a new Attorney General despite the fact that the Slovak Parliament had already elected a candidate for the same. He is also infamous for his slip of the tongue during press meets.

He wrote his autobiographical work ‘I Think Nationally, Feel Socially’ and published it in 2006.

Ivan Gašparovi?'s two books, ‘A Dignified Life for All’ and ‘About Us: Slovakia, Europe, Earth,’ were both published in 2009. The second book was published both in English and German.

On February 24, 2005, Ivan Gašparovi? was conferred Lithuania’s Knight Grand Cross of the Order of Vytautas the Great.

In the same year, he was granted Collar of the Order of the Cross of Terra Mariana by the State of Estonia.

On October 27, 2008, Croatia adorned him with the Grand Order of King Tomislav in recognition of his outstanding contribution in promoting friendship and cooperation between the two twin states - Croatia and Slovakia.

Ivan Gašparovi? married Silvia Beníková in 1964. They have two children, a son named Denisa and a daughter called Iva. His favourite sport Basketball was not so popular in Slovakia as compared to soccer, tennis or ice hockey.