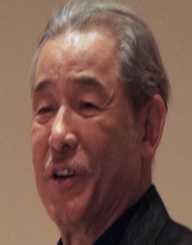 Issey Miyake was born 22nd April 1938, in Hiroshima, Japan. He studied graphic design at the Tama Art University in Tokyo, and he graduated in 1964.

After graduation, Issey Miyake worked in Paris and New York City. He returned to Tokyo in 1970 and established his own business, the Miyake Design Studio which produced high-end garments for women’s fashion. In the 1980s, he worked on a new format of pleats that became synonymous with his garments. He used his pleats in costumes he did for the Ballett Frankfurt.

Miyake was excellent friends with Dame Lucie Rie, a famous ceramics artist. She had a robust collection of ceramic and porcelain buttons which she left Miyake when she died. He used the buttons in his new fashion collections.

One of Issey Miyake's most famous friends and clients was Steve Jobs, owner of Apple. Miyake designed the black turtlenecks that Jobs was known for wearing. In 1994, he gave the design of his men’s collections to his colleague, Naoki Takizawa, to manage. He followed this in 1999 with his women’s collections. Miyake wanted to return to full-time research.

In 2007, Takizawa launched his label and was supported by Miyake in the process. He was replaced by Dai Fukiwara who managed the Miyake business until 2012. Although he retired from the front-line in 1997, Miyake still oversees all lines created by his company. These include the main collection called Issey Miyake, HaaT, Bao BaoIssey Miyake, and Issey Miyake Watches and Perfumes, amongst several others.

Among his awards, Miyake has the following:

2005: Awarded the PraemiumImperiale for Sculpture