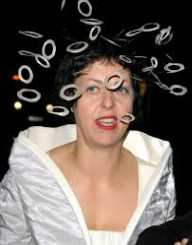 Stylist and fashionista Isabella Blow was born Isabella Delves Broughton on the 19 November 1958 in Marylebone, London, England. She was one of four children born to Sir Evelyn Delves Broughton, 12th Baronet and his wife, Helen Shore.

Isabella Blow had two sisters Julia and Lavinia, and a brother. Her brother John drowned in a shallow ornamental pond on the family estate when he was two years old (1964). Blow witnessed the tragedy. Her parents divorced in 1972, with her mother leaving the family home.

She was subsequently raised by her father. When her father died in 1993, he left the bulk of his fortune to his third wife, leaving Blow 5,000 pounds.

The book White Mischief and film, are based on the life of Blow’s grandfather Sir Henry John Delves Broughton, who was accused and acquited of the murder Josslyn Hay, 22nd Earl of Erroll in Kenya in 1938.

Isabella Blow was a pupil at Heathfield School. She then did a secretarial course in Oxford before enrolling at Columbia University in New York (1979) to study art.

Isabella Blow met Anna Wintour, the fashion editor of American Vogue who offered her a job as her assistant. She also worked as an assistant for editor Andre Talley. In 1986, she returned to the UK, where she began working as a fashion director of Tatler in London. She also worked on The Sunday Times magazine.

After Philip Treacy sent a hat to the Tatler office, Isabella Blow took an interest in his designs, and she provided him with a place to work on his designs. She also encouraged the talent of Alexander McQueen whom she discovered when he was a student at the Royal College of Art.

Isabella Blow also discovered models Honor Fraser, Sophie Dahl, and Stella Tennant and designer Hussein Chalayan. Blow worked as a consultant with Lacoste, Swarovski, and DuPont. She appeared in the film The Life Aquatic with Steve Zissou (2004) as Antonia Cook. And in 2006, she was a guest panelist on Project Catwalk.

In 1981, while living in the US, Isabella Blow married Nicholas Taylor. They divorced in 1983. Her second husband was Detmas Blow, whom she married in 1988. The couple had no children. During the last three years of her life, Blow separated from Detmar Blow (2004), but they were later reconciled.

During this time, she was diagnosed with bipolar disorder and also suffered from ovarian cancer. On the 7th May 2007, after several suicide attempts, she ingested weedkiller and died in hospital the following day.