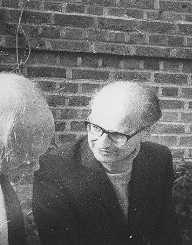 Imre Lakatos was born on November 9th, 1922 in Debrecen, Hungary. His parents were both Jewish. After the Nazi invasion in Hungary during World War II, his mother and grandmother were sent to the Auschwitz concentration camp where they both died. Around this time he changed his surname to Molnar, and later took the name, Lakatos.

Lakatos attended University of Debrecen and graduated in 1944. He studied mathematics, physics, and philosophy. In 1948, he received his Ph.D. from the same institution. After finishing his doctorate, Lakatos went to study at the Moscow State University for a brief period of time. In 1961, he obtained a doctorate in philosophy from University of Cambridge.

During World War II, Lakatos was actively involved in communist activities. In 1947, he took the position at the Hungarian Ministry of Education as its senior official. In 1950, Lakatos experienced trouble with officials, since he did not agree to follow the Russian orders without a valid reason. For refusing to follow orders, he was arrested on charges of revisionism and went to prison for three years.

Upon his release in 1953, Lakatos resumed his studies and began research in the field of mathematics. He also started to translate mathematics books into Hungarian. In 1956, during the Hungarian revolution, Lakatos left the country and settled in Great Britain, where he spent the rest of his life.

In 1960, Lakatos began working at the London School of Economics as an assistant lecturer of the Department of Philosophy, Logic and Scientific Method. During this time, he began intensively writing on philosophy and science of mathematics. While he was studying at Cambridge, Lakatos wrote his doctoral thesis “Essays in the Logic of Mathematical Discovery.” His work was published in four parts in The British Journal for the Philosophy of Science during 1963, titled Proofs and Refutations.

Imre Lakatos wanted to improve his work on Proofs and Refutations. Therefore he refused to publish it as a book. The revised version was released as a book after his death as Proofs and Refutations: The Logic of Mathematical Discovery. Lakatos was the author of several papers on the topic, but in his later years, he switched to writing on the philosophy of science. Lakatos was working as a teacher at the London School of Economics for 14 years and became the editor of The British Journal for the Philosophy of Science in 1971.

Lakatos worked on proving the Euler-Descartes theorem V- E +F=2 in his doctoral thesis. He also majorly contributed to the field of philosophy of science. He had an idea to create a synthesis of Thomas Kuhn’s model of the scientific theory.

Lakatos died suddenly on February 2, 1974, from a heart attack.