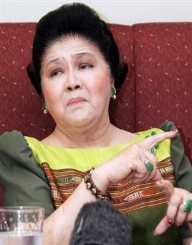 Imelda Marcos was born on July 2nd, in 1929. She lands herself a spot among the infamous individuals due to her lavish spending, particularly on shoes. Besides, she was the wife of Ferdinand Marcos, Philippines former president.

Imelda Marcos was born on July 2nd, in 1929. Her place of birth was in Manila, Philippines. At the time of her birth, she was named Imelda Remedios Visitacion Romuáldez.

She was the daughter of Remedios Romuáldez and Vicente Orestes Romuáldez. Her father was a lawyer. Her mother was the second wife to Vicente. However, Imelda was the first born child to her mother and the sixth to Vicente’s children.

Imelda Marcos went to Holy Ghost College where she finished grade one. Later, she joined Holy Infant Academy. Being brought up in a low-income family led to some humiliations as she was often late with school fee payments.

Afterward, she joined Jeyte High School in around 1944. She also went to St. Paul’s College where she ran for the office of the president in the student body. She graduated from her undergraduate studies in 1952.

Imelda Marcos crossed paths with Ferdinand Marcos on April 6th, in 1954. The two met when there was a budget hearing done by Ramon Magsaysay, Philippines’ 7th president. After a few days of courting Imelda, the two wedded secretly on April 17th, 1954. They, however, made their marriage official the following month on May 1st, 1954.

When Imelda Marcos was the first lady, a good number of Filipinos lived in poverty. As a result, her extravagant spending habits made her conspicuous. Often, Imelda would travel to distant places to purchase expensive outfits and jewelry.

Imelda Marcos obsession with luxurious items was at the cost of Filipino citizens. Marcos tenure was, as a result, associated with corruption and theft of billions of money. In 1972, Marcos made himself the dictator after pushing for the martial law.

This was a move that would ensure that he thwarted any resentments or oppositions from the people. Consequently, many individuals were tortured with some even being executed.

After some time, in 1983 Benigno Aquino, a vocal opponent to Marcos regime was assassinated. This angered the Filipino people, and the government lost its control. Following the turn of events, Imelda fled the country with Marcos.

On 4th, November 1991, Imelda Marcos was permitted to return to the Philippines. In 1992, Imelda ran for office, and she emerged fifth from the seven candidates that contested. Despite losing in the elections, she was elected as Leyte’s congresswoman in 1995.

Three years later, she again ran for the presidential office. However, she withdrew to offer full support to Joseph Estrada who then won in the elections.