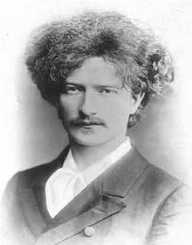 Polish musician and politician Ignacy Paderewski was born Ignacy Jan Paderewski on the 6 November 1860 in the village of Kury?ówka, in the Podolia region of the Russian Empire, today’s Ukraine. His mother died when he was an infant, and when he was three years old, his father was arrested for political activities. Paderewski Snr.’s arrest was because of the January Uprising of Polish patriots against the Russian Tsarist regime. Paderewski was subsequently adopted by an aunt.

Ignacy Paderewski was homeschooled until the age of 12, and also had piano lessons as a boy. When he was 12, he was accepted into the Warsaw Conservatory (1872-1878).

After graduating from the Warsaw Conservatory, Ignacy Paderewski joined the music school as a piano tutor and taught there until 1881. He then relocated to Berlin where he studied music composition with Heinrich Urban and Friedrich Kielm. He met the Polish actress Helena Modrzejewska in Berlin who recognised and encouraged his talent as a pianist.

Modrzejewska was responsible for organising fundraising which enabled Paderewski to study with Theodor Leschetizky in Vienna. He spent three years in Vienna and 1897, he made his concert debut. With his striking good looks and talent, the concert was a success and established the beginning of his professional career as a musician.

Ignacy Paderewski made his French debut in Paris in 1888. Then in London in 1890, he performed in St James’ Hall. The English critics were scathing, but the public in England was conquered, and his English concerts throughout the country were all a success. In 1891, he made his first tour of the United States and was widely acclaimed. He went on to tour America more than 30 times during his career. In later visits, he was travelling in his own Pullman carriage.

Upon arrival at his destinations, he would be met by officials and fans who would escort him to the concert hall. His success in America became known as Paddymania. He also performed at many charity events and in 1893; he performed at the Chicago World Fair without charging a fee. His opera Manru debuted at the Metropolitan Opera House in New York City in 1902.

Ignacy Paderewski had a career which lasted five decades and touring that time he toured internationally. Apart from Europe and America, he also visited South America, Oceania, and Africa. He was also the first artist to give a solo performance at Carnegie Hall in New York City. After a break from music, when he was involved with various diplomatic and political roles, Paderewski returned to touring in 1923.

Ignacy Paderewski's successful career as a musician made him a rich man, and he became involved in various philanthropic and political causes.  When World War I broke out in Europe in 1914, Paderewski settled in California, and during his time there was appointed the American representative of the Polish National Committee which had its headquarters in Paris, France. The role of the committee was to work with the Entente nations to gain and prepare Poland for self-rule.

Paderewski was passionate about the cause and spent his time and energy focused on raising funds and influencing public opinion. President Woodrow Wilson’s advisor, Colonel House consulted Paderewski about Poland. At the end of World War I, in November 1918, Paderewski returned to Europe. Paderewski was elected to head the Polish delegation at the Versailles Peace Conference and was one of the signatories to the Treaty of Versailles.

Until November 1919, Ignacy Paderewski was Prime Minister of Poland; after his resignation, he continued in various diplomatic roles until 1921, when he resigned and retired to Morges, Switzerland.

There are numerous schools and streets named after Ignacy Paderewski in Poland. He has a star on the Hollywood Walk of Fame in California (1960) and was the recipient of many other awards including various honorary doctorates, the Order of the White Eagle, the Legion of Honour from France, an Honorary Knight Grand Cross of the Order of the British Empire and an Academy Golden Laurel from the Polish Academy of Literature.

From the time Ignacy Paderewski first started making serious money as a celebrated musician, he was involved in various charities and organisations until late in his life.

Ignacy Paderewski founded the Paderewski Prize in 1901. He left over seventy vocal, instrumental and orchestral works. In 1941, on a visit to the United States, a tribute 50th anniversary of Paderewski’s first U.S. tour was arranged, the event was known as Paderewski Week, and there were 6,000 concerts held in his honour.

Ignacy Paderewski's first wife Antonia Korsakowna (m.1880-died 1880), was a fellow student he met at the Warsaw Conservatory. A year after their marriage, their son was born. The child was severely handicapped, and his wife died when the boy was an infant. He later married Helene Paderewski (m.1889-died 1934).

Ignacy Paderewski was visiting New York City on a trip to advocate for US involvement to help Europe defeat Nazi Germany when he took ill and died on the 29 June 1941. He was laid to rest in Arlington National Cemetery until 1992 when his remains were returned to Poland. His ashes are in a crypt in St John’s Cathedral in Warsaw, Poland. His son, Alfred, died in 1901.