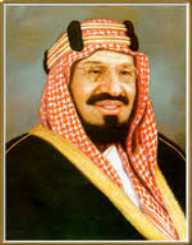 Abdulaziz ibn Abdul Rahman ibn Faisal ibn Turki ibn Abdullah ibn Muhammad Al Saud known as Ibn Saud was born on 15 January 1876. He was the founding father of Saudi Arabia and its first monarch. He was the son of the last ruler of the Second Saudi State, Abdul Rahman bin Faisal. He became the leader of all central Arabia. His family known as House of Saud has stayed in power for over a century in central Saudi, but he is remembered for his conquests.

Ibn Saud was born on 15 January 1876, Riyadh, Central Arabia. His father, Abdul Rahman bin Faisal, was the last ruler of the ‘Second Saudi State,’ Emirate of Nejd. For the past 130 years, his family has been in power completely in central Arabia. His mother was Sarah Al Sudairi.

From his tender age, his strict father ensured that he got proper leadership training and he was later put under Sheikh Gadi Abdullah Al Kharji for more training. In 1890 While he was a teenager, Al Rashid dynasty chased him and his family away forcing him to live for a short time in Qatar and Bahrain and almost ten years in Kuwait.

Sheikh Mohammad Bin Museibih taught him the Holy Qur’an. He studied the Islamic theology and its jurisprudence, which was taught by Sheikh Abdullah Bin Abdu Latif Al Al-Sheikh.

In 1901, Ibn Saud and his relatives raided the Najd, which was successful and helped to attract others. During Ramadan, he attacked Riyadh and was able to retake it from the Al Rashid. In 1902, after leading 40 men, he took over the city and the Third Saudi State began after the governor was killed. He attracted many supporters of House of Saud supplying them with arms.

The Ottomans were fought against by his troops through guerilla warfare thus killing Rawdat Muhanna, which made them retreat after their food supply was disrupted. In 1912, he gained the Najd and the eastern coast. He later formed a military-religious brotherhood called the Ikhwan.

The British Government created a good diplomatic relationship with him during the World War I. in 1915; the two governments formed the Treaty of Darina to make Saudi a British protectorate but were superseded with by the Jeddah conference (1927) and the Dammam conference (1952). In 1920, he re-launched his bid to oust the Al Rashidi, and by 1922, they were all destroyed. In 1927 he initiated the Battle of Sabilla to suppress the rebellious Ikhwan. In 1932, Ibn Saud became the king of the Kingdom of Saudi Arabia.

In 1925, Ibn Saud's allies ended the 700 years rule from the Hashemite when he captured the holy city of Mecca from Sharif Hussein. In 1926, he was proclaimed as the King of Hejaz by leaders from Mecca, Jeddah, and Madina. On 1927, the British government signed the Treaty of Jeddah, which recognized Ibn Saud as the ruler.

Ibn Saud had heart problems, and it became severe on October 1953, which led to a heart attack that killed him on November 9, 1953.

The Arab customs allowed him to be polygamous mainly to safeguard alliances. He also had concubines having many children and that included 45 sons in which 36 survived to adulthood. In 1935, an attempt was made on his life, but he escaped unharmed. Some of the wives who were known were Tarfah bint Abdullah Al Al-Sheikh, Lulua bint Salih Al Dakhil, Al Jawhara bint Musaed Al Jiluwi, Lajah bint Khalid bin Hithlayn, Jawhara bint Saad bin Abdul Muhsin Al Sudairi, and Hassa Al Sudairi. He was close to his paternal aunt, Jawhara bint Faisal. Ibn Saud died on 9 November 1953.