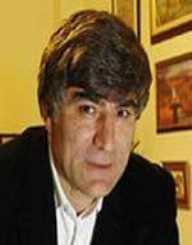 Hrant Dink was born on September 15, 1954. He was a Turkish Armenian editor. He was also a journalist and a columnist. He died at the age of Fifty two years.

Hrant Dink was born on September 15, 1954, in Malatya, Turkey. He was born to Sarkis Dink and Gulvart Dink. He was brought up alongside two siblings. He was brought up at the GEdikpasa Armenian Orphanage. In 1970’s he left the orphanage. He later joined Hay Avedaranagan Incirdibi Protestant Armenian Primary School. He then joined Bezciyan School. He later joined Uskudar Surp Hac Armenian High School where he undertook his secondary education. He was later expelled.

He after that enrolled at the SiSli Public High School where he completed his secondary education. He later joined Istanbul University where he pursued zoology. While at the university, he became a sympathizer of TIKKO. In 1972, he changed his name legally to FIrat Dink. He later graduated with a Bachelor's Degree in Zoology. He then started studying Philosophy but did not finish. He later joined Military Service in Denzilli which he completed successfully.

In 1979, Hrant Dink founded a bookstore named ‘Beyaz Adam’ alongside Hosrop and Yervant. He later became a manager of the Tuzla Armenian Children’s Camp. In 1996, he worked at the Agos Weekly as the editor-in-chief. He held this position until he met his death. With his help, Agos weekly released its first edition. He became renowned in the editorial field, and he had the opportunity to write columns in the Zaman and Birgun all of which were national dailies.

His role in publishing made him open up the channels of communication to the Armenian Community. He later became a leftist activist. He after that wrote and published all about democratization problems in turkey. He then offered to be a volunteer of the Armenian Community. He also spoke against the destruction of the Armenian Cultural Heritage. In 2006, he featured in ‘Screamers’ which was a genocide documentary film. He was later prosecuted for denigrating Turkishness. In 2010, after the case, it was found that his rights of speech were being violated.

In 1976, Hrant Dink married Rakel Yagbasan with whom he had three children. He was assassinated on January 19, 2007, in Istanbul, Turkey. He died at the age of Fifty two.