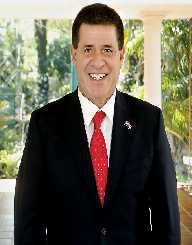 Also Known For : President Of Paraguay

Horacio Cartes is the present President of Paraguay. He was a successful businessman. His businesses and manufacturing companies include virtually every trade available in Paraguay giving him great control over the markets. Horacio Cartes has been involved in various allegations and corruption charges but has been acquitted of all charges and has no criminal charges on record.

As President, he has promised to take Paraguay in a new and promising direction and is working towards achieving the same. He believes that Paraguay is Latin America’s best-hidden treasure.

Horacio Cartes was born on 5 Jul 1956 in Asuncion, Paraguay. His parents were Ramon Telmo Carter and Elva Jara. His father was a very successful businessman and owner of the Cessna aircrafts franchise in Paraguay.

He wanted his son to pursue a career in aeronautics. Horacio attended the Spartan School of Aeronautics in the US. He began an internship in the Cessna in Wichita, Kansas, US. He returned to Paraguay in 1975 and started his company.

In 1975 Horacio Cartes founded the currency exchange company that later was known as Banco Agambay. He became the target for currency fraud investigation and spent four years in hiding.

He returned in 1986 and was incarcerated for 60 days on fraud charges. He was accused of making money on a central bank loan obtained at a preferential exchange rate that went through money exchange to purchase farm equipment from the US. The case was later dropped.

He was again imprisoned for seven months in 1989 on charges of currency fraud. The court eventually cleared him.

By 1992 the Banco Agambay became very powerful. In 1994 he became a partner of Tabacalera deletes known as Tabesa, the largest manufacturer of cigarettes.

His businesses are called Grupo Cartes and include banking, soft drinks, meat, and tobacco companies.

In 2000 a plane carrying marijuana and cocaine was seized by the anti-drug police from his ranch. Horacio denied any involvement and claimed that the plane had made an emergency landing.

Horacio Cartes was accused by the Brazilian Congress in 2004 of smuggling cigarettes into their country. According to Wiki leaks he was suspected by the US of being involved in laundering drug money.

Till 2008 Horacio Cartes was not a registered voter and not involved in politics. In 2009 he joined the Colorado party. He was asked by the party to stand as a Presidential candidate in the 2013 elections. The party had decided to drop the mandatory requirement of being a member for ten years to stand as presidential candidate. His fortune helped him in spending extravagantly on his presidential campaign. His assertion that he was not in politics to make money but to serve the people struck a chord with the masses.

Horacio Cartes was elected President of Paraguay in April 2013 and took charge on 15 Aug 2013. His inauguration was attended by Chilean President Sebastian Piera, Argentina’s Cristina Fernandez de Kirchner, Peru’s Ollanta Humala, Brazil’s Dilma Rousseff, Uruguay’s Jose Mujica and Taiwan’s Ma Ying-jeou. Within the first week, he was given special powers to take action against the Para guan Peoples Party (EPP). As president Horacio has taken steps to improve the conditions of the country.

Horacio Cartes started an emergency program of distributing kits of food to poor citizens. This was to ensure that they receive the 2,200 calorie requirement. He aims to expand the program to include others but does not want to encourage dependency on it. Horacio Cartes believes that his ministers have the great responsibility of honoring the mandate given by the people. A majority of the ministers have been chosen for their technical expertise.

Horacio Cartes has taken steps to improve relations with neighboring countries like Brazil, Uruguay, and Argentina. He also believes that Paraguay must not abandon Mercosur due to the economic benefits of free trade.

From 2001 o 2012 he was the President of the Club Libertad during which the football team won 7 tournaments. He has been President of the National team department of the Paraguay Football Association during the 2010 FIFA world cup qualifications.