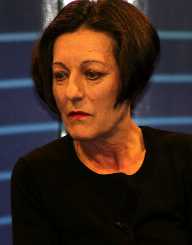 Herta Müller was the winner of 2009 Nobel Prize in Literature, famous for her writings.

Herta Müller was born on 17 of  August 17, 1953, in Ni?chidorf. The village in Banat, Southern Romania. She was the only child. Her mother was deported to Soviet Union's, forced into a labor camp until 1950.

Herta Müller father was arrested during World War II for volunteering for Hitler's Waffen-SS in the Panzer Division Frundsberg; he became a truck driver after the war.

Herta Müller went to Nikolaus Lenau High School, although the school was in Romania, it taught in German. After high school, she went to the West University of Timi?oara, to do German studies and Romanian literature.

While in university, she joined Actionsgruppe Banat, a dissident writers group calling for freedom of speech. The group was dissolved in 1975.

After graduating in 1976, Herta Müller worked for an engineering company. She translated technical specifications, and she turned down a request to be an informant in 1979. Her refusal to help the secret police ended with her being dismissed.

Herta Müller published her first book, Niederungen (Nadirs) in 1982, after the death of her father due to liver disease. Niederungen was a collection of short stories that gained her fame, but her family shunned her for exposing the darker side of Romania.

The more censored version was released in 1984, but she had managed to get the original version published in Germany.

After releasing  Drückender Tango in 1984, she continued to write. Herta’s first work to be translated into English was The Passport, where it was first published in 1986. A year later, Herta was allowed to emigrate to Berlin.

Herta Müller was ‘sold’ by her country for eight thousand Deutsche Marks, paid for by the German State. But her emigration date was 29 February 1987, after a lengthy battle, she and her husband Richard Wagner finally settled in West Germany.

Despite leaving Romania, Herta Müller was still hounded by the secret police, who had accused her of being a secret agent. In 2009, Herta managed to get her file from the Securitate, revealing that she was protected only by her reputation in Germany.

Other notable awards are Roswitha Prize, Kleist Prize, and the Aristeion Prize. She was also elected as a member of the Deutsche Akademie für Sprache und Dichtung.

In 2009,  Herta Müller bagged the Franz Werfel Human Rights Award for the publication of Atemschaukel, written based on her friend Oskar Pastior’s experiences. She also won the  Nobel Prize in Literature for her work in poetry.

Herta Müller married Richard Wagner, who was also a novelist in Romania. The pair moved to West Germany together.

They separated in 1990 and had their marriage annulled. She married Harry Merkle straight after the annulment.