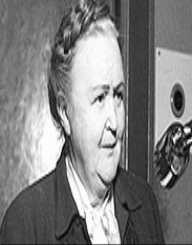 Hella Wuolijoki was born on July 22, 1886, in the hamlet of Ala in Helme Parish, Estonia. Later in her life, she added ‘H” to her name. Her sister, Salme Dutt was a prominent member of the Communist Party of Great Britain. Her granddaughter Erkki Tuomioja is the Minister for Foreign Affairs since 2011.

Hella’s father was a bookshop owner, and her mother came from a family of farmers. She attended the Puskin Grammar School in Dorpat. After finishing her secondary education, Ella wanted to continue with her studies. Her father had many influential contacts, which allowed her to attend university for women in St. Petersburg. She obtained her Master of Arts degree in 1908, becoming the first Estonian women to gain this degree. During her time at the university, she began to publish her work in several periodicals.

In 1908, she married Sulo Vuolijoki. He was a personal friend to Lenin. The couple divorced in 1923.

Hella Wuolijoki gained her first recognition in 1912 when her play Talulapsed began showing in Finland and Estonia. The play was later forbidden due to its nationalistic nature. In 1923, she became the director of the Carelia Timber Co and established herself as a successful businesswoman. She continued to rise her career ladder when in 1931 she assumed the role of chairman of the board of the SuomenNafta company. During this time in her career, Woulijoki wrote several plays.

During the 1930s, her work began to be more about the empowerment of women and was saturated with political ideas. In 1933, she completed two of her best-known works, Ministerijakommunisti and Lakijajarjestys.

Under her pseudonym Juhani Tervapaa she wrote several books, which are characterized by strong female characters. Her book Juurakon Hulda (1937) was adapted into the 1947 film The Farmer’s Daughter. Her play Herr Puntila und sein Knecht Matti debuted in Zurich, which became an instant success. Woulijoki’s best-known work is the Niskavouri series, featuring the power struggle between the older and younger generations of women.

Hella Wuolijoki had connections with the Soviet intelligence and security structures. She was suspected by the Finnish police to be an illegal resident spy, but no evidence was found. However, in 1943, she was arrested for hiding a Soviet spy Kerttu Nuorteya. His mission was to gain information about the political sentiment and German troops in Finland.

During the 1920s and 1930s, Hella Wuolijoki ran a literary and political salon which discussed culture and left-wing ideas. She was also a member of the Finnish Parliament and the head of the SKD: parliamentary group. From 1945 to 1949, she served as the director of the broadcasting company YLE.