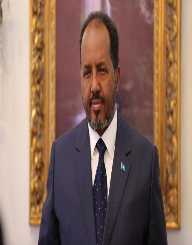 Five years after his diploma, Hassan Sheikh Mohamud left for India and enrolled at the Bhopal University currently “Barkatullah University” in 1986. In 1988 he graduated with a master’s degree in technical education. Hassan Sheikh Mohamud also studied mediation, trauma healing, and designing learner-centered trainingat the Eastern Mennonite University’s Summer Peacebuilding Institute in Harrisonburg, Virginia, where he graduated in 2001.

After winning a seat to the Somalia parliament in August, he was elected by the legislators to become the President of the country on 10 September 2012. The elections held in the parliament house in front of foreign envoys and telecasted live first saws the former President Sharif Sheikh Ahmed take the lead with 64 votes in the first round. Hassan Sheikh Mohamud amassed 60 votes and Prime Minister Abdiweli Mohamed Ali having 32 votes, and Abdiqadir Osoble was fourth. Ali and Osoble dropped from the race during the second round and asked their supporters to vote for Mohamoud. During the second round, Hassan Sheikh Mohamud had 190 votes being 71% of the votes while Sharif Sheikh Ahmed had 79 representing 29% of the votes.

Hassan Sheikh Mohamud was therefore sworn into office that same day. The results of the election were welcome by international communities, the United Nations and the African Union, which congratulated the country for that peaceful election and how Somalia has proved that it needs change. After his election, Hassan Sheikh Mohamud pledged his resolve to help achieve success in the post-war reconstruction of Somalia. Hassan Sheikh Mohamud was duly inaugurated on September 16, 2012, as the President of Somalia in an occasion attended by some world leaders and other dignitaries.

Since Somalia was just coming out of the war, Hassan Sheikh Mohamud put in place several initiatives to foster peace among the people, but that came with a challenge. The first attack was during a meeting at the Jazeera Hotel between Hassan Sheikh Mohamud and other foreign dignitaries. Two gunmen dressed as government officials attacked the hotel resulting in 10 casualties including an AU peacekeeper, Somalia security officials and the attackers among others. Being totally resolved to bring about change Hassan Sheikh Mohamud in a speech the moment in front of the foreign officials and press stated that"things like what's happening now outside will continue for some time, but I'm sure, and I'm confident it's the last things that are taking place here in Somalia. We have been hearing such events frequently, but this is a special case. We didn't hear it for the last couple of months even."Hassan Sheikh Mohamud, therefore, noted that ensuring security was his topmost priority. Another attack on him was in Merca when a roadside bomb detonated near his vehicles on September 3, 2013, injuring one of his security personnel. The Al-Shabaab militant group claimed responsibility for the two attacks.

Despite all the attacks on his presidency by the al-Shabaab militant group, Hassan Sheikh Mohamud put in place some policies to address the challenges of the country. First of it was the proposal to the United Nations to lift the arms embargo placed on the country since the start of the civil war in 1992. This was in his bid to strengthen the Somalia Arm Forces to be able to ensure adequate security in the country. The African Union, the United States, Arab League, and IGAD supported Hassan Sheikh Mohamud's proposal. The 15-member UN Security Council through the Resolution 2093 suspended the arms embargo on March 6, 2013.

His next move was to ensure national reconciliation effort, between the central government in Mogadishu and the regional authorities in Hargeisa in April 2013. The peace talk was held in Ankara, Turkey with the Turkish government serving as the negotiator. After the talks, Mohamoud and the President of northwestern Somaliland, Ahmed Mohamoud Silanyo signed an agreement to corporate on security and allocate ensure fair allocation of development to the Somaliland region. The reconciliation effort continued with the signing of an agreement with the autonomous Jubaland administration in southern Somalia in August 2013 in Addis Ababa. Mohamoud initiated other policies like the youth development initiatives and national tree week to ensure ecological preservation among several others. He also ensured good foreign policies between other African countries, the United States, The Gulf countries and Europe.

Hassan Sheikh Mohamud has married twice, first to Qamar Ali and then Sahro Xasan. He has several children from both marriages.