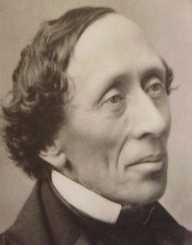 Hans Christian Anderson was a Danish writer who is best known for his telling of the classic fairy tales such as Thumbelina and The Little Mermaid.

Hans Anderson was born on 2 April 1805 in Odense, Denmark. Anderson was named after his father. His father had received primary education, and it was he that introduced the young Anderson to literature. Anderson’s first book as a child was Arabian Nights a series of Arabian folk tales. Anderson’s mother was Anne Marie Adersdatter, and she worked as a washerwoman. Anderson’s father died in 1816 and to help his family financially he became an apprentice weaver.

When he was fourteen Anderson went to Copenhagen to pursue a career in theatre. The plan was abandoned when the young Anderson’s voice broke. He then switched to writing when he was advised by a friend to become a poet. The director of the Royal Danish Theatre, Jonas Collins, with whom Anderson had worked ensured that he was enrolled in a grammar school to further his education. Collins convinced the King of Denmark Fredrick VI to become a sponsor of young Anderson’s education.

While still at school Hans Anderson published his first story, The Ghost at Palnatoke’s Grave. Anderson continued to study into his early twenties, but he loathed school and was abused by headmasters.

Hans Anderson continued to write despite a lack of encouragement from his educators. His first notable success was the story A Journey on Foot from Holmen’s Canal to the East Point of Amager. Along the journey the protagonist of Anderson’s story meets a number of intriguing characters, including Saint Peter and a talking cat. Anderson also wrote poetry and theatrical pieces at this time. He was given a small royal grant in 1833 and used the money to journey across Europe.

While in Switzerland Anderson wrote Agnete and the Mermen. He then moved on to Italy and travelled throughout the country, a journey he would retell in his 1835 autobiography, The Improvisatore. The same year Anderson published his first volume of fairy tales. The first book included the stories of Thumbelina, The Little Mermaid and The Princess and the Pea. Thumbelina was a story about a tiny girl and her dealings with all sorts of small animals.

The Little Mermaid tells the tale of a mermaid who becomes human in effort to win the love of a human prince and gain an eternal soul. The Princess and the Pea tells the story of a prince’s search for a true princess to marry. Initially these fairy tales did not gain any popularity and it was Anderson’s novels that made him famous in his native land.

Hans Anderson was also a keen supporter of Scandinavism, the belief that Denmark, Sweden and Norway are united by a common culture, and wrote poetry and a Scandinavian national anthem. The idea of Scandinavism was relatively popular in the early part of the nineteenth century, but soon fell from popular opinion.

He released a second volume of fairy tales in 1838, but he still failed to capture the public’s imagination. It was not until 1845 and the appearance of his fairy tales in an English translation that Anderson received critical praise and success from his fairy tales. His work was the talk of London and his fairy tales made him a famous literary figure in Britain. Anderson would travel to England and while there met the nation’s foremost writer, Charles Dickens.

On a second visit to England, Hans Anderson spent five weeks at the home of Dickens, whom Anderson admired very much. As well as his novels, fairy tales and poems Anderson also wrote many travel books. The most notable of his travelogues were, In Sweden, In Spain, A Visit to Portugal in 1866 and A Poet’s Bazaar.

Hans Anderson was a hopeless romantic who fell in love continuously and almost always with unattainable women. These unrequited love often manifested themselves into Anderson’s writing. His infatuations were not just limited to women

Anderson also wrote love letters to some male friends, but it is believed that Anderson never partook of a homosexual relationship and that his infatuations were mostly academic. Anderson never married nor did he have children. Anderson died on 4 August 1875.