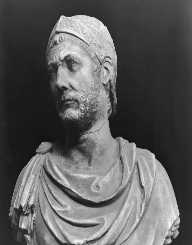 Hannibal was a Carthaginian military leader who led a long protracted war campaign against the Roman Empire.

Hannibal was born in 247 BC in the North African kingdom of Carthage. The region is today called Tunisia. He was the son of Hamilcar, a respected Carthaginian military general. He was trained to be a warrior since childhood. His father had him swear an oath of lifelong hatred of the Romans. Carthage and the Roman Empire were longtime war protagonists. Hamilcar had been defeated by Rome in the first Punic war. Thus, Carthage was paying a hefty tax to Rome as part of the peace treaty.

When Hamilcar died in 229 BC, Hasdrubal took over the command of the army. Hannibal was promoted to a high ranking officer in the military. In 221 BC, Hasdrubal was killed. This time it was the army which chose its commander. Hannibal was made the general of the Carthaginian military at the age of 26. His first mission was to consolidate his command in the Spanish region which was under Carthage.

He moved his base to Cartagena in Spain. To gain the support of the local people, Hannibal married a local princess Imilce. He made alliances with the local tribes and conquered those who did not. The demarcation line between Carthage and Rome was the town of Saguntum. The town which was under Rome was semi-autonomous.

With a revamped army, Hannibal was ready to launch his attack on Saguntum. In 219 BC he attacked and conquered the town. Rome sent an envoy to protest the incursion on its territory. Carthage was adamant and decided to attack Rome; the second Punic war broke out. He left the command of Spain to his younger brother who was also known as Hasdrubal. Hannibal set off to take Rome. In 2018 BC he crossed into Gaul, which is France, into the Alps Mountains.

The Romans knew that it would take a while before Hannibal attacked Rome. The Carthaginian army was lodged in the Alps during the winter. With the aid of the local tribes, Hannibal managed to cross the icy Alps during the winter. He caught the Roman army by surprise and defeated them in the battles of Trebbia, Trasimene, and Cannae. The superior military strategy baffled Rome. Hannibal’s advance had brought him to the outskirts of Rome itself. A standoff ensued between the two armies. Hannibal had no supplies to lay a siege, and Rome had a weak army to take on the advancing enemy.

Roman General Scipio whose father had been killed in the first Punic war brought in a new strategy. To ease the pressure on Rome, he called for an attack on Carthage. He was given the command of the army. Scipio attacked Spain and killed Hasdrubal. In took some time before Hannibal knew what had happened. When the report of his brother's death reached him, Hannibal never thought that Rome had pacified Spain. The Roman army marched into North Africa. Carthage recalled Hannibal from Rome. The two generals met in the Battle of Zama in 202 BC.

Unlike before, the Roman general Scipio had mastered the Carthaginian formations to his advantage. He used similar battle tactics to defeat Hannibal and his forces. Another peace treaty was signed. The Carthaginian army was downsized and heavy taxes imposed by Rome. Hannibal was appointed the chief magistrate on Rome’s behest. He then turned into politics overseeing the changes in the military and judiciary. The influence Hannibal was gaining in the local politics bothered Rome. The Roman governor called for Hannibal’s removal.

Sensing his downfall, he fled to Tyre then to Ephesus. He was hired as a military strategist for the Ephesus army. In 190 BC, the Seleucid Empire went to war with Pergamum. Hannibal was given the command of the Seleucid naval fleet. Though he had never sailed before, he put up a spirited war. He was eventually defeated and went into exile. In Bithynia, Hannibal was under the pursuit from the Romans. They called for his arrest and extradition.

In 183 BC, Hannibal committed suicide by taking poison in Libyssa, in Ephesus. Hannibal was a military leader for most of his life. Even in the period of war, he proved very pragmatic in his approach to the enemy. He studied his enemy well before any engagement. He offered an olive branch to his enemies before waging war. As a show of respect to his opponents, Hannibal treated prisoners of war with dignity.