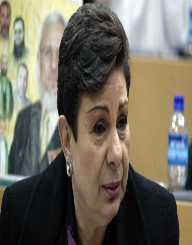 Hanan Ashrawi was born on October 8, 1946. She is a Palestinian human rights activist and legislator. She believes that women have an active role to play in politics.

Hanan Ashrawi was born on October 8, 1946, in Nablus. She was born to Daoud Mikhail and Wadi’a Ass’ad Mikhail. Her father founded the Palestine Liberation Organization while her mother was a nurse. She was brought up alongside four siblings. Hanan attended Ramallah Friends Girls’ School. She later graduated with a Bachelor’s and Master’s Degree in Literature from the American University of Beirut.

In 1967, Hanan Ashrawi began her career when she served as a representative of the General Union of Palestinian Students’. The aim of the union was to enable the involvement of women in active politics. In the same year she was also in exile in Lebanon due to the Third Arab-Israeli War. She joined the University of Virginia to pursue a PhD in Medieval and Comparative Literature. In 1973, she reunited with her family in West Bank. She later became the founder Chairlady of the English Department at Birzeit University. In 1974, she founded the Birzeit University Legal Aid Committee. She also established the Human Rights Action Project.

In 1986, Hanan Ashrawi became the dean of the faculty of arts at Birzeit University. In 1988, she was elected a member of the Intifada Political Committee. This was an organization that fought for independence of Palestine from Israeli rule. In 1991, she became a representative of the Palestinian Delegation at the Middle East peace negotiations. She also served on the delegation’s Leadership and Guidance Committee and the Executive Committee. In 1993, Palestine gained Independence and she was appointed the head of the Preparatory Committee of the Palestinian Independent Commission of the Palestinian Independent Commission for Citizens’ Rights in Jerusalem.

She also continued to teach at the Birzeit University until 1995. In 1996, she became a representative of Jerusalem Governorate’s Palestinian Legislative Council. In the same year she also began serving as Palestinian Authority Minister of Higher Education and Research. In 1998, she resigned from the post as education minister and founded MITFAH- the Palestinian Initiative for the Promotion of Global Dialogue and Democracy. The organization was founded to fight for the people’s democracy and protection of human rights.

In 2011, she invited John Baird who is the Foreign Minister of Canada to visit Palestine. She is currently a member of the Advisory Board for Organizations such as the United Nations Research Institute for Social Development and The International Human Rights Council among others. She has also published literary works that include ‘This Side of Peace: A Personal Account’, ‘The Modern Palestinian Short Story: An Introduction to Practical Criticism’ and ‘Anthology of Palestinian Literature’ among others.

In 2003, Hanan Ashrawi was awarded the Sydney Peace Prize for her contribution to global peace. She has also received other prizes such as the Olof Palme Prize and the Mahatma Gandhi International Award for Peace and Reconciliation among many other awards. She has also received honorary awards from institutions such as American University of Beirut and Earlham College in Indiana and Smith College in Massachusetts.

In 1975, Hanan Ashrawi got married to Emil Ashrawi who is a photographer and director of plays. They have two children together, Amal and Zeina. She is the first women to be a member of the Palestinian National Council.