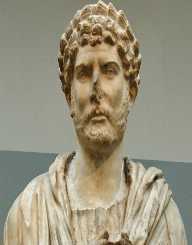 Hadrian was born on January 24, 76 AD as Publius Aelius Hadrianus in Italica Hispania, in the modern day Seville in Spain. His father was a descendant of Italians who settled in the southern part of Spain more than a quarter of a century before his birth.

He came from a wealthy aristocratic lineage. In 85, Hadrian lost his father. He grew up under the trust of his paternal uncles Trajan and Acilius Attianus. At the age of 14, Hadrian went to Rome. He joined the military and became an excellent social hunter.

In 91, Hadrian joined the Roman Senate sitting in Rome. He became in charge of three Roman Regions. In 95 he led a military expedition to cover the Upper Moesia region along the Danube River. He stayed there until 96 when he moved to the Lower Moesia province. In 97, his uncle Trajan became the heir apparent to the throne of Rome.

Emperor Nerva signed a deed of declaration naming Trajan as his successor to the throne. In 98, Emperor Nerva died while Trajan was on a military campaign. Hadrian moved to inform Trajan of the emperor’s death. His brother in law Julius Servianus unsuccessfully tried to block Hadrian from delivering the news to Trajan. Hadrian created animosity towards Silvanus for the rest of his life.

In 100, he married the emperor’s grandniece Vibia Sabina. He accompanied Trajan in the military campaign in Dacia, a territory along the Danube in 102. Hadrian grew in stature, and by 108, he was the Senate Consulate. When Sura died just after Hadrian became a powerful senator, his political career dwindled. It is believed his brother in law Servianus engineered the stalling of his rise to power.

Hadrian accompanied Trajan in his military onslaught in the Parthian wars. In 117, Trajan moved west to cover another battlefront. Hadrian was left in charge of the Roman army in the Syrian province. Trajan had no biological son.

He adopted Hadrian and named him the successor to the Roman throne. Hadrian learned of the news on August 9 117. On August 11, 117, Trajan died in the capital Rome. Several conspiracy theories about the emperor’s death surfaced, pointing fingers to Plotina. Nonetheless, no one was accused of his death. Hadrian began his return to Rome in preparation for the coronation.

His enthronement to the throne was not easy. Powerful politicians tried to bloke his coronation in Rome. Hadrian got the support of the army and Senate. Acilius Attianus, his paternal uncle and head of the emperor’s guards executed four senators who opposed the enthronement of the new emperor. Historians believe Hadrian ordered the killings. Hadrian denied any involvement on the murder after entering Rome in 118.

In a bid to sanitize the bloody start of his reign, he endeared himself to the citizens with populist declarations. He canceled huge debts owed by the citizens to the government; arranged public gladiator fights and replaced many senior officials including Attianus.

Hadrian used his brilliance to appease all he owed favors without offending the status quo. He used his first three years to stabilize his government before setting out of Rome.

In 121, he embarked on his first tour of the empire. He started with the western and the eastern borders. He met the troops and inspected the fortified frontier defenses. He visited Gaul, Germany, and Britannia in 122.

Hadrian moved south to Spain and then went to Asia Minor. He crossed to the Balkans and Parthia. He went through Athens and returned to Rome in 125. He evoked pleasant memories in Rome by calling himself Hadrianus Augustus in memory of the Augustus legacy. In 128, he left Rome again. He went to North Africa, Asia Minor, Syria, and Arabia.

In 134, he left Rome for the province of Judea. The Jews in the region revolted against Rome and declared independence in 132. The leader of the revolt Simon Bar Kokhba reigned as the prince for three years. In 135, Hadrian pacified the rebellion and decreed new laws over the region. He upheld the ban on circumcision, desecrated the temple and renamed the province Syria Palestine. This, in effect, elevated the status of the Jews’ sworn enemies, the Palestinians.

In his last years, Hadrian faced his succession intrigues with shrewdness. He executed his erstwhile rival Julius Servianus along with his grandson Fuscus. Hadrian adopted Lucius Commodus who died two years later. He chose the young 18-year-old Annius Verus as his successor. Hadrian silenced the opposition by proposing Senator Antoninus to succeed him. He arranged for Antonius to adopt Verus and the son of his close friend Ceionius. Hadrian secured the throne for Verus.

Roman Emperor Hadrian died on July 10, 138 at the age of 62 at his palatial villa in Baiae. His body was buried at Puteoli and later reburied in Rome. His remains were then cremated. A temple in Rome was honored after him.