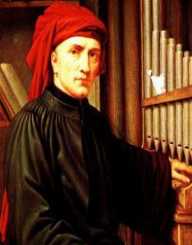 Guillaume Dufay was a composer of the early Renaissance period. He composed mainly French-Flemish tunes and was a very influential musician. He is credited with creating several harmonies that are used even today in modern music. In his time, he was one of the prominent figures and leading composers in Europe in the 15th century.

Guillaume Dufay was very willing to experiment with ideas from other styles of music and incorporated them into his compositions. The Friday also taught several other famous musicians of the 15th century. His music continued to inspire for generations to come.Most of his creations were based on sacred music, and he was also part of a choir.

Not much is known with certainty about his early life. Guillaume Dufay is believed to be born near Brussels. He was a bastard son of a priest whose name is unknown, and a woman named Mary Dufayt. He was brought up by his mother who took him to Cambrai when he was still an infant. Due to his stay at the Cathedral of Cambrai, parts of his early life have been documented.

At the Cathedral, Dufay displayed his immense talent for music. And so the Cathedral authorities began his training. He joined the Cathedral choir as a choirboy in 1409. He was taught in those days by Nicholas Madeleine, and he received a copy of the Doctrinalein 1411 when he was only 14 years old.

When Guillaume Dufay was 16 years old, he was made a chaplain at the St Geri Cathedral. He served on the Council of Konstanz before returning to Cambria in 1480.

After returning to the Cathedral of Cambrai, he stayed only for a few years. In 1420, he left his position and began traveling. In Italy, Guillaume Dufay met composers like Arnold Lantins and Hugo, who were famous musicians. In the year 1420, Dufay became a priest.  Before his brief stay at Rome, he also served under the Pope. In 1435, he started serving at Florence and composed one of his most famous motet – NuperRosarum Flores. Guillaume Dufay began to take a graduate degree in Law from the University of Turin and then returned to Cambrai.He settled there for the rest of his life. After returning to Cambrai, Dufay composed several pieces of music.

Guillaume Dufay also became the overseer of the General Administration of the Cathedral. After this period, Dufay composed one of his lamentations that are his most famous pieces. In the year 1458, he retired from service and traveled to Savoy frequently. He taught his students to compose music, and also tinker with different musical instruments to develop harmonies.

Guillaume Dufay returned to Cambrai again to spend his last few years. He became the canon of the Cathedral. By now, Dufay’s reputation had established in as one of as the most famous composer in Europe.He composed music for the court of Burgundy.

From being an illegitimate child, Guillaume Dufay became a very rich and famous musician. But he was able to keep his personal life extremely private, and only records of his relatives are those of his mother and the people he lived with at Cambrai. It is not known whether he married or not. He also avoided social meetings after his mother’s death in 1444.

In late 1474, the phrase became seriously ill. Guillaume Dufay passed away on November 27, 1474. His tombstone was lost for centuries after the destruction of the cathedral. But in 1859, it was found again.