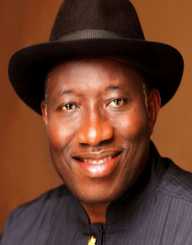 Goodluck Ebele Azikiwe Jonathan was born on the 20th of November 1957 in Ogbia Bayelsa state. Jonathan was of Ijaw heritage and belonged to a family of canoe makers.

While Goodluck Jonathan was at the university, he began to lecture at the Rivers State College of Education. Jonathan served thus between 1983 and 1993. Goodluck also served in the now defunct government agency Oil Mineral Producing Areas Development Commission as assistant director and environmental-protection officer between 1993 and 1998.

Goodluck Jonathan began his career in politics after he joined one of the major political parties in Nigeria, the People’s Democratic Party (PDP) in 1998.

In 2007 Goodluck Jonathan ran for the presidential elections alongside President Umaru Musa Yar’Adua as his vice president. However, President Musa Yar’Adua who had been sickly even from the period of campaign died shortly after resuming office. President Goodluck Jonathan was yet again moved up through the removal of a superior. Jonathan was sworn in as president and served from the 5th of May 2010 until he was re-elected on the 29 May 2011.Jonathan served until the 29th May 2015 after which he conceded defeat in the 2015 general elections to long-term contender President Muhammadu Buhari.

President Goodluck Ebele Jonathan’s entry into the presidency was a highlight for the South-Southern area of Nigeria. They had hitherto been relegated as a minority group and had not had much involvement in governance. The south-south is the oil-rich region of Nigeria. Although a significant contributor to government revenue, they have not enjoyed the benefits of this contribution. They have mostly been condemned to poverty and health risks due to oil mining. They believed that because of the election of one of their own they would no longer be relegated and may enjoy some respite from the injustice suffered.

President Goodluck Jonathan launched the Roadmap for Power Sector Reform in August 2010. This was aimed at solving the epileptic electrical power situation of the country.

Goodluck Jonathan launched the Youth Enterprise with Innovation in Nigeria (YOUWIN) initiative in October 2011. It was aimed at youth enterprise development and aiding creativity of youth between the ages of 18 and 35

President Goodluck Jonathan was most well-known for his Transformation Agenda. This was the crux of his election campaign. It was launched to deliver projects, programmes, and key priority policies between 2011 and 2015, the duration of his presidency.  The Transformation Agenda was coordinated by the National Planning Commission (NPC)

President Goodluck Jonathan was lauded for peaceable handover when he lost the elections to President Muhammadu Buhari on the 29th  May 2015. This act was said to have been in tandem with his promise to reform the electoral process to make it peaceful and organized. It also averted what would have been bloodshed and political crisis.

Conflict and rejection marred Goodluck Jonathan's entire tenure as president. There were irregularity and delay of his being sworn in as president after the death of President Umaru Musa Yar’Adua. It seemed the powers that be were not ready to give room to someone from a minority group to become president. The constitution, however, prevailed at last Goodluck Jonathan was sworn in.

Goodluck Jonathan further faced rejection from a lot of educated Nigerians who were against his first re-election. Jonathan was criticised as lacking the charisma, backbone, and intelligence to handle government.

Goodluck Jonathan's tenure was riddled with security crisis caused by the terrorist insurgent group Boko-Haram. Jonathan was criticised for his inability to combat the crisis which spanned the course of his tenure.

Upon the advice of international experts who decried the fuel subsidy run in Nigeria as being unsustainable, the president announced the removal of the support. This sparked nationwide outrage, protests, and criticisms until a compromise was reached.

Goodluck Jonathan also tried to change the name of one of the top Universities of the Country, the University of Lagos to Moshood Abiola University. The attempt was to honor the late Moshood Abiola, a political icon. This was severely opposed by students and alumni of the school until the change was reverted.

The Goodluck Jonathan's administration was accused of harboring and enabling rampant corruption and looting of public funds. President Jonathan himself was alleged to have used over 3 trillion Naira (USD 15 billion) of government funds for his election campaign and personal projects.

President Goodluck Jonathan is married to Patience Jonathan. She was a prominent figure in all his election campaigns and presidency. She was famous for her dramatic reactions to crisis, poor grammar and bold statements.

They have two children together Ariwera Jonathan and Arabi Jonathan.