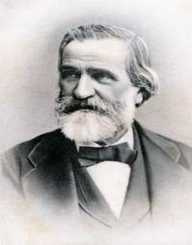 Giuseppe Verdi was an Italian opera music composer from Parma.

Giuseppe Verdi was born in the village of Le Roncole in Parma, on October 9, 1813. He was the son of Carlo Giuseppe and Luigia Uttini Verdi. He started singing in the local church choir when he turned seven years. At the age of 10, he joined his primary school. He played his own composition for the public at the age of 13. After high school, he went to Milan. He joined a choral group called Societa Filarmonica. He left the group and joined the opera led by Rossini. He directed the performance rehearsals of the opera before any public performances.

He wrote his first opera song Rocester while under Rossini. In 1839, he lost his wife. He composed his second opera song to honor his wife. The song became a commercial disaster. Verdi suffered a double tragedy. He lost his wife and failed to impress with his song. He went into depression. On March 9, 1842, Verdi performed his song Nabucco. He based his composition on the Biblical character of Nebuchadnezzar. Verdi was praised for his performance. His commercial success prompted him to stay in Milan.

In Milan, Verdi became friends with other composers and opinion leaders. He composed a poetic song in memory of Margia Luigia. Luigia, the Duchess of Parma died in 1843. His song endeared him to the music lovers in Parma. He enlisted the help of Emanuele Muzio. Muzio became the only assistant to Verdi in his entire musical career. They worked together in all the compositions and performances. Muzio assisted Verdi in his overseas tours in Europe and the US.

Verdi gained international success after 1850. In 1851 he composed the song Rigoletto. Three years later, Verdi wrote Il Trovatore, and the second song La Traviata. In 1867 he wrote the opera, Don Carlos. Verdi completed his song Messa da Requiem in 1874. Verdi composed other songs which were less successful in the market.

As an international artist, Verdi shuttled between Milan and Paris. He performed at various theaters in Paris. He became increasingly popular for his songs The Sicilian Nespers in 1855, Simon Boccanegra, and A Masked Ball. He entered the British opera by composing the song Macbeth, in recognition of the Shakespeare drama set. Verdi was praised for composing the British set with an Italian touch. Verdi became a serious contender to the title of opera maestro in Europe. He was only second to Giacomo Meyerbeer in popularity.

Verdi began to scale down his performances in preparation to retire. He was approached by an old friend to do a music duet composition. His friend Giulio Ricordi prevailed on Verdi to work with Arrigo Boito. On February 5, 1887, the duet produced the composition Otello at the La Scala Theater. The composition Otello became a major commercial success in Europe. Opera music lovers hailed it as the best composition in the history of opera.

Verdi abandoned his resolve to retire and continued writing songs. He wrote the song Falstaff and performed it at the La Scala on February 9, 1893. Verdi attracted a huge audience at the performance including European royalties and aristocrats. Verdi cemented his position as the best opera composer beating Giacomo Meyerbeer in popularity.

Verdi returned to Italy during his twilight years. He supported the local opera industry and worked with charitable organizations. He supported the victims of the Sicilian earthquake in 1894. Verdi donated funds for the construction of social amenities including hospitals in Parma and across Italy.

He received overwhelming praise in every performance he directed. In his career, he was applauded for three outstanding compositions. Messa da Requiem composed in 1874, Otello composed in 1886, and Falstaff composed in 1893. He performed in filled opera halls in all his tours. In 1894, he received the Order of Chevalier of the Legion of Honor.

Giuseppe Verdi married Margherita in 1836. She delivered two children who died in their infancy. Margherita died soon after. He remarried Giuseppina Strepponi in 1859. He never fathered a child in his second marriage. As Margherita, Giuseppina died before Verdi.

Giuseppe Verdi died in Milan on January 27, 1901, aged 87. His funeral and burial were graced by a mammoth crowd previously unseen in Italy. He was buried next to the grave of his second wife Giuseppina.

He concentrated in the Sicilian traditional opera composition. His opera tempo was fast punctuated with a subtle interlude as if connecting with an audience that lagged behind. Verdi based his songs on real-life experiences and exuded energy within him.

He managed to permeate all classes of life and cultures across the world. His music traveled from Milan to as far as Russia to the east and Argentina across the Atlantic Ocean.