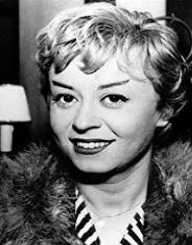 Giulietta Masina was an Italian award-winning actress born in 1921 and died in 1994. Her Gelsomina in La Strada's portrayal took her to great heights of her career internationally. The talented actress began her career while still at the University. Her performances were considered among the best in an Italian film of her time. Among her best performances was in the 1954 La Strada and 1957 Nights of Cabiria.

Giulietta Masina alias Giulia Anna Masina was born on February 22, 1921, in San Giorgio di Piano, in Italy. She was the firstborn and had 3 siblings. Her father earned a living as a violinist. On the other hand, her mother was a teacher.

Masina took lessons in piano, voice, and dance while attending an Ursuline convent school. She began acting in Gruppi Universitari Fascisti during the Second World War. Later, she was admitted to the Sapienza University of Rome where she studied literature.

Giulietta Masina appeared in the manly film that was written and even directed by her husband Fellini. Her early career in film was in 1946 when she acted the role in Paisà. However, it was an uncredited role. In 1948, she appeared in without pity. Thereafter, in 1954, she played a role in La Strada starring Anthony Quinn.

Masina’s role in Senza Pietà /Without Pity as a prostitute was among her first important roles in the film.

After Masina married Fellini, a film director, her priorities changed. Her acting career which often came first was now replaced by her marriage. She began declining leading roles in many films including The Night (La Notte). Instead, she offered it to Jeanne Moreau.

Also, she shocked many when she declined a role in Divorce Italian Style. It was later rated among the best movies at the beginning of the 1960s with Daniella Rocca playing the lead role.

In 1957, for her role in Nights of Cabiria, Masina won the best actress at the Cannes Film Festival. Also, the film was presented with an Academy Award in the category of Best Foreign Language Movie.

In 1943, the actress got married to Federico Fellini. She suffered a miscarriage a few months later. Luckily, they were blessed with a son in 1945. Sadly, he died at infancy from encephalitis. They never had other children thereafter. However, they remained married until October 1993 when her husband died. This was just a few months before she also died.