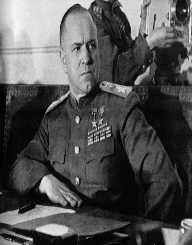 Georgy Zhukov was a military commander born in 1986. He is best remembered for his participation in defeating Axis Powers in the Second World War. He was inducted into the Russian Army during the First World War. From there he kept going up the ladder of military ranks. He led Mongolia forces as their commander to defeating Japanese army. He later led the Red Army as their deputy commander-in-chief. He was later forcefully removed from government, and since then Zhukov stepped down from any political involvement.

Georgy Zhukov was born on December 1st, 1896. His place of birth was Strelkovka in Kaluga Oblasts. His father Konstantin Artemyevich was a shoemaker.  His mother Ustinina Artemievna, on the other hand, was a farmer. His elder sister was called Maria. He grew up in poverty with his peasant family.

He was inducted into the Russian army in July 1915. This was at the time of the Second World War. He participated actively in the war which earned him a promotion to be a non-commissioned officer in his valor.  He later joined the Red Army to take part in the October 1917 Revolution. Afterward, he fought along with the first Calvary army from 1918 to 1921 during the Russian Civil War.

Georgy Zhukov was appointed in 1930 to command the second Cavalry Brigade which was of the seventh Cavalry Division. He later became the commander in 1933. He also served in the Byelorussian Military District as the deputy commander.

He fought well with the 1st Soviet Mongolian Army which led to the defeat of the Japanese troops. Stalin was impressed with him and appointed him chief of the Red Army’s general staff. This was in 1941. Later he led his Soviet troops to war against German Troops and once again succeeded. The drove the German troops away forcefully. This was followed by his appointment as deputy commander-in-chief specifically for the defense of the city of Stalingrad. His troops then defeated German 6th Army marking their surrender.

His suggestions on how to go about with the battle of Kursk led to the triumph of the Soviet troops. They used his ideas and defeated the German Troops again. Another German defeat in Berlin followed this. By then Georgy Zhukov had proved to be a powerful officer in the military force. He was therefore appointed as the supreme military commander of Germany’s Soviet Occupation Zone. However, his success was not appreciated by Stalin. He demoted Zhukov sometimes. Stalin passed away in 1953 upon which Georgy Zhukov began his career in politics. He became deputy defense minister and later the minister. His argument with Nikita Khrushchev over the policies of army marked the end of his political career. He was forcefully removed from his position in government. Georgy Zhukov since then was never heard of in any political involvement till the time of his death.

Georgy Zhukov was awarded his 1st Hero of the Soviet Union in 1939. He again received this honor three other times in 1944 then 1945 and later in 1956. During his career, he was presented with foreign awards as well. These include Legion of Merit from the USA in 1945. In the same year, he was also awarded Grand Cross of the Legion d'Honneur from France.

Georgy Zhukov first marriage was to Alexandra Dievna in 1953. They were blessed with two daughters Era and Ella. Later in 1965, they divorced. He remarried in 1965 to Galina Alexandrovna. She was once an officer in the military of the Soviet Medical Corps. The couple had a daughter, Maria.

Georgy Zhukov succumbed to a series of strokes and died on June 18th, 1974. He died in Moscow, Russia at the age of 77.