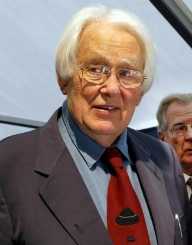 Georges Charpak was born on March 8th, in 1924. His birthplace was in Dabrowica, Ukraine. He was a renowned physicist. Charpak is celebrated for being a Nobel Prize winner in 1992. This prize was awarded to him for his exceptional contribution in the world of Physics.

Georges Charpak was given the name Jerzy Charpak at the time of his birth on August 1st, 1924. Both his father and mother were of the Jewish descent. His father’s name was Maurice Charpak, and his mother was called Anna Charpak. His other sibling was called Andre Charpak. When Georges was aged 7, his family migrated to Paris. It is after ten years that Charpak began enrolling for his formal education. He first went to study mathematics at Lycee Saint Louis. After this, he went to school at Lycee de Montpellier.

While serving at the World War II in 1943, Georges Charpak was jailed by Vichy authorities. A year later he was deported to Nazi confinement camp located in Dachau. He remained here until 1945 after the camp had been liberated. After this, he went to one of the prestigious engineering schools in France called Ecole des Mines. He graduated after three years from the institution. He went for his further studies at the College de France where he was under the tutelage of Frederic Joliot-Curie in 1949. Years later, in 1954, he earned his Ph.D. degree in nuclear physics from the same college.

After completing his education, Georges Charpak went to work with Center for Scientific Research, a national body. He offered his skills here until 1959. After departing from this research facility, he joined European Organization for Nuclear Research located in Geneva. Here, he made progress and brought in advancements that would later earn him high acclaim in the world of physics. For example, in 1968, he came up with the multiwire proportional chamber. This was an advancement of the former bubble chamber. His invention would lead to numerous advantages including improved data processing ability. Simply stated, this invention was of great importance more so to the particle physics.
During the 70s, he partnered with Policarpo and Ngoc in the coming up of scintillation drift chamber. In 1974, he created the spherical drift chambers. This new invention would make it possible to study proteins by merely using X-ray radiation. His inventions would later become applicable to both the fields of medicine and biology.

Georges Charpak kicked the bucket on September 29th, 2010. At the time of his death, he was 86 years old.