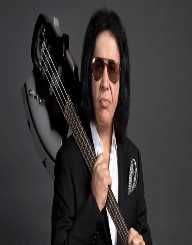 The story of Gene Simmons is one of ‘from rags to riches.’ He had a difficult childhood, but from that, he went on to become one of the most successful rock artists in the history of the world. As the co-founder of his band KISS, that has sold more Gold Albums than any other band in the history of America; Gene Simmons has seen phenomenal success.

Gene Simmons also has a TV show based on his family’s life, named Gene Simmons Family Jewels. Artists with a cult following called the KISS Army, Simmons has inspired thousands of musicians to venture into Rock ’n Roll.

Gene Simmons was born as Chaim Witz in Tirat Carmel, Israel on August 25, 1949. His mother was a migrant from Hungary. She survived the Holocaust and met his father Yeichel Witz in Israel. After Chaim was born, the family struggled for money, and his father left, never to return.

Simmons’s mother Flora worked low paying jobs to make ends meet and also get her kid an education. Often spending time with babysitters, Simmons learned Turkish, Hungarian, Hebrew, and Spanish. After things didn’t work out in Israel, his mother brought him to New York. He was eight years old at the time. Simmons was quite studious and his mother, who worked in a factory in Brooklyn, made sure that he valued education. While at school, he saw the band Beatles perform and got inspired to make a career in music.

Not wanting to disappoint his mother, Simmons continued to study, while making plans to have a career in music. Gene Simmons went to the Sullivan County Community College, and then finished his bachelor’s degree from Richmond College, New York.

Simmons’s career has been full of ups and downs. From early struggles to phenomenal success and then mid-time crisis to the later resurgence, he has seen it all. While he has tried his hands at a variety of careers, his most successful one is as the singer and bassist for the band KISS.

Dreaming of becoming a highly famous musician, Simmons began his musical career by playing in a series of bands, the most famous of which was Lynx. Success eluded him, however, and he faced many challenges, until, he met Paul Stanley. Together they formed the band Wicked Lester and tried to make it big. Their first audience was composed of three people.

Not losing heart, they carried on. Simmons took a job as a school teacher at a Spanish Harlem, and then as an assistant to an editor at Vogue, in the meantime. Their deal with Epic Records was a major setback. They spent a year recording an album that was rejected by Epic, and the band was doomed to fail.

Fate had other plans, and they met Bill Aucoin, who got them their first recording contract from Emerald City Records. With their flashy on-stage antics like painted faces and breathing fire, they soon earned a fan following.

In 1975, came their first successful album Alive. Another platinum album, Destroyer followed this. After a series of huge hits, the band developed a cult following called the KISS Army.

In the early 1980s, Criss, one of the band members left due to differences with the rest of the members. It was followed by a series of replacements, till in 1992, when Simmons found people who were a good fit. Since then, the band has continued to make great music, and selling more gold albums than any other band in history. Some well-known albums are Asylum and Crazy Nights.

Simmons had an unsuccessful film career appearing in films like Trick or Treat and Runaway. He now makes guest appearances, usually as himself, in a handful of films.

In his long career as a musician, Simmons has earned many awards and honors. This includes the People’s Choice Award for the song ‘Beth’ in 1977. He was awarded the key to the city of Dallas, and later Winnipeg.

In 2012, he received the Golden God Award from the Revolver magazine. The Royal Artistic Circle of Barcelona presented him with the Golden Medal in 2014.

Gene Simmons is married to former Playmate Shannon Tweed. They tied the knot on October 1, 2011. They have two children together, a son named Nick and a daughter Sophie.

A show chronicling the life of Simmons and his family members airs on television, by the title Gene Simmons Family Jewels. He hates the extremist views of Islam and considers Islamic Extremists as vile creatures.