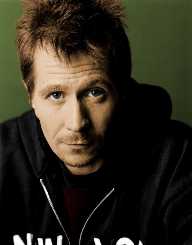 Gary Leonard Oldman, English actor, filmmaker, and musician was born in New Cross, London on March 21, 1958. His father was a sailor and a welder, but he left the family when Oldman was seven years old. His mother was a homemaker. He learned to play piano as a child, and later performed as a singer, but he was more interested in acting. Oldman attended West Greenwich School but left it when he was 16.

Gary Oldman got his first role in the 1971 film The Raging Moon. During the 70s, Oldman studied at the Young People’s Theater in Greenwich. At the time, he was working various jobs to earn his living. Later on, Oldman won a scholarship to attend Britain’s Rose Bruford Drama College in Kent. He graduated with Bachelor of Arts in 1979.

During his time at the theater, Oldman appeared in several plays. For his part in the play The Pope’s Wedding, he won the Time Out’s Fringe Award for Best Newcomer and British Theater Associations Drama Magazines Award as Best Actor. During the 80s, Oldman became very popular with audiences for his trademark intensity.

Until 1984, Gary Oldman had made several appearances in various theatre and movie projects. One of his brightest roles was in the play Saved. After his award-winning performance in The Pope’s Wedding more offers came. He was a member of the Royal Shakespeare Company from 1985 to 1986.

Director Alex Cox saw Oldman’s theater performance and offered him the role of ill-fated rocker Sid, in the 1986 movie Sid and Nancy. At first, he turned the role down, but later, urged by his agent, accepted it. His work on Sid and Nancy and another project, Prick Up Your Ears were enough to make Oldman an object of interest in Hollywood.

After starring in several movie projects, Gary Oldman moved to the USA in 1990. He was offered the lead role in Edward Scissorhands, but he turned it down. During this time, Oldman was seen as one of the best young British actors at the time.

In 1991, Oldman starred Lee Harvey Oswald in the movie JFK. Oldman did a lot of research on his character, even met with his wife, Marina. His next successful performance was in romance-horror film Bram Stoker’s Dracula. After this performance, Oldman became a favorite portrayer of villain roles. One of his most memorable performances has been in Quentin Tarantino’s True Romance and Luc Besson's Fifth Element. His 1994 performance in Leon: The Professional as a corrupt DEA officer has been named as one of the best villains in the history of cinema.

In 2001, along with Anthony Hopkins and Julianne Moore, Gary Oldman starred in the movie Hanibal, where he portrayed the only surviving victim of Hanibal Lecter. For the role, he had to spend six hours per day to achieve the character of the disfigured appearance.

In 2001, Gary Oldman appeared in two episodes of hit TV series Friends. After that, his career took a downturn, and Oldman was not cast until 2004. He then landed the role in Harry Potter Film series playing Potter’s godfather Sirius Black. The following year he starred as police officer James Gordon in Batman Begins. The sequels for the film were even more successful than the first movie and got Oldman back on the A-list.

For his role in Tinker Tailor Soldier Spy, Oldman was nominated for Academy and BAFTA awards. He also played in 2012 movie Lawless, and 2013 film Paranoia. The same year he also starred in one of the lead roles in Dawn of the Planet of the Apes.

He is currently working on several projects, including The Hitman’s Body Guard, which will be released in mid-2017.

Since the 1990s, Gary Oldman has lived in Los Angeles. He is very private about his own life. His sister Maureen is also an actress. She starred in Oldman’s directed movie Nil By Mouth. During the 90’s, Oldman had well-known alcohol problems. He was once caught for driving with twice the allowed amount of alcohol in his blood. In 1993, he went to a treatment facility and attended Alcoholics Anonymous meetings.

Gary Oldman has been married four times. In 1987, he was married to English actress Lesley Manville, but the couple divorced three months after the birth of their son. From 1990 till 1992 he was married to Uma Thurman.

From 1997 till 2001, he was married to Donya Fiorentino. They had two sons together. Oldman was granted sole custody of the kids since Fiorentino had a drug addiction. She was once found by her daughter unconscious, after an overdose of cocaine. In 2008, Gary Oldman married English singer and actress Alexandra Edenborough, but in 2015, she filed for divorce.