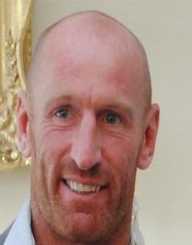 Gareth Thomas popularly known as “Alfie” is a Welsh former rugby player. Born on July 25, 1974, he is behind Shane Williams as the second highest Wales try scorer and ranks 13th among international try scorers. He played for Wales in the rugby union and rugby league. Thomas played rugby union for teams including Bridgend, Cardiff, Toulouse, and Cardiff Blues among others.

Moving into the rugby league, he played for the Crusaders in the Super League and Wales. Thomas was the most capped Welsh rugby union players with 100 test match appearances until September 2011, when Stephen Jones broke his record. Thomas is behind Shane Williams as the second highest Wales try scorer and ranks 13th among international try scorers. Thomas disclosed his sexuality as gay in December 2009. He retired from the game in October 2011.

Gareth Thomas was born on July 25, 1974, in Sarn, Bridgend, Wales to Yvonne and Barry Thomas. His father was a postman. Growing up, he was attracted to the rugby sport, and this love later became a profession. After graduating from Ogmore School, he initially worked as a postman, following his father’s footstep. However, he untimely followed his love for rugby by going into the sports.

Gareth Thomas started his rugby career at the youth level at Pencoed RFC. After an impressive youth career, he joined Bridgend RFC for a first-class career. Thomas played for the team for a couple of years then moved to Pontypridd RFC. Before he could play a game for his new team, Bridgend resigned him. In 1997, he moved to Cardiff RFC, where he spent about five years. In 2001, he returned to Bridgend and two years later captained the team to a Welsh Premier Division.

In the 2003-04 season, he played for the Celtic Warriors, when the Welsh Rugby Union introduced the regional rugby plans. Captaining the team for a season, Warriors disbanded. Thomas then joined French club Toulouse as a replacement for the team’s captain Emile Ntamack. In 2005, he helped the team to win a Heineken Cup against Stade Français at Murrayfield. That same year he was found guilty for assault and in 2007 was banned for four weeks for misconduct. After a successful career with Toulouse, he returned to Cardiff Blues for the 2007 to 2008 season.

In 2010, Gareth Thomas joined the Crusaders in the rugby league on an 18-month deal. He made a league debut on 19 March 2010, in a match against French side Catalans Dragons. Just thirty minutes into the game, he crashed with Catalan player David Ferriol, resulting with him having a concussion and could not continue the game. His debut tries score for the team was on April 11, 2010, in a game against Wakefield Trinity in a 20-10 away win.

Gareth Thomas made an international debut in a match against Japan on May 27, 1995. In a 1999 game against Italy in Treviso, he scored four tries, which was a Welsh record-equalling and became one of the seven Wales players to achieve that. In 2004, Thomas broke a record by Ieuan Evans to become Wales’s rugby player with most international tries with 40 until 2008, when Shane Williams surpassed his total.

Joining the team for the 2005 British and Irish Lions tour to New Zealand, he became the captain of the team when Brian O’Driscoll injured in the opening of the first test against New Zealand. He captained the second and third tries. He captained the team in the 2007 Six Nations final game against England. Thomas played his 100th cap and last test game in Wales’s match against Fiji in the 2007 World Cup.

Gareth Thomas married Jemma Thomas in St Bridges Major in 2002. Jemma suffered three miscarriages during the marriage. The couple filed for a divorce in 2007, which was finalised in 2009. In December 2009, Thomas came out publicly about his sexual orientation of being a gay. This made him the first rugby union player to disclose being gay. He had discovered his gay status as a teenager and at the age of 17 had his first gay sexual encounter. In 2015, his autobiography Proud, written alongside Michael Calvin won Sports Book of the Year.