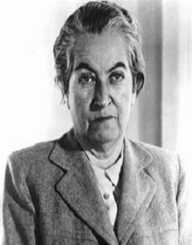 Gabriela Mistral is one of the most world-renowned Chilean poets who got famous after winning the Nobel Prize for Literature in the year 1945. She had a long career starting right at the age of 15 when she began as a school teacher and thereby progressed leaps and bounds throughout her career.

As a poet, the central theme revolving around her work was generally related to nature, betrayal, love and more specifically a mother’s love, sorrow, recovery, and travel. She had such a significant impact that her portrait also appears on the 5000 Chilean peso banknote.

Gabriela Mistral pseudonym of Lucila Godoy Alcayaga was born on 7th of April in the year 1889 in Vicuna, Chile but spent her childhood in a small village of Montegrande. She was born in a low-income family and spent most of her childhood in such circumstances which were never far off from poverty. Her maximum primary education was done in a school taught by her older sister Emelina Molina for whom she always had tremendous respect.

She was born to Juan Geronimo Godoy Villanueva who was also a school teacher but adding onto the misery, he abandoned the family when Gabriela was three years old and later died in 1911.

As highlighted earlier as well, Gabriela Mistral began her career when she was a kid of 15 years as a teacher’s aide. She did so to support her family and herself in a seaside town of Compania Baja which is situated near La Serena, Chile. During these times only, she started publishing her poems which got famous with time and also pushed her from one post to another in real quick time.

Her first publication came in the year 1904 in a small newspaper which was some early poems such as ‘Dreams,’ ‘Intimate letter’ and ‘By the Sea’ using various pseudonyms and variations on her civil name. Later on in her career due to two heartbreaks, Mistral earned her first recognized literary work by the name of ‘Sonnets on Death’ or as originally published ‘Sonnets de la Muerte,’ which changed the ideology of people when looking at death and life in the year 1914.

Gabriela Mistral was also awarded her first prize when she participated in the national literary contest ‘Juegos Florales’ which was held in Santiago. She adopted her name Gabriela Mistral from two of her favorite poets, and the same name was used since her first renowned publication in the year 1914.

Since then, she wrote many poems related to the tragedies like Desolacion in the year 1922 which was also an aftermath of a love affair ending up in the suicide of her lover which also shows the glimpses of Gabriela’s life. There were other works as well like “Ternura” in 1924, “Tala” in the year 1938 and “Lagar” in the year 1954. All these creations enhance the evidence that the interest in humanity is a much broader aspect and the utmost principle of love was not only of the children but of the oppressed as well.

It can be clearly said from her works that her artistic works as inferred from her poems are a feeling of warmth and supported by emotional power. This power is also represented by her through her figures and peculiarity of the words used by her. Her poems are still considered to be deep and are even translated into English.

Though Gabriela Mistral's career was not limited to poems, she even tried her luck in politics and was very successful. Besides that, she was also a poet, diplomat, a humanist, and an educator as well.

Gabriela Mistral did not have the best of childhoods which could be seen from her works as well. She was never open to anybody and was very reserved. She fell in love twice, but both times she had to face a heartbreak because of which she decided never to get married and lead a single life till her death.

She was suffering from diabetes and heart problems, but she eventually died of pancreatic cancer in New York on 10th January in the year 1957.