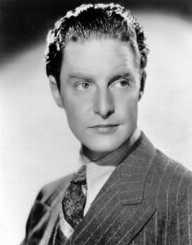 British actor Robert Donat was born on the 18 March 1905 in Withington, Manchester, England. His parents were Emil Donath and Rose Alice Green.  His family ancestry was of English, German, French, and  Polish. As a child, he stuttered and when being treated for the condition, his elocutionist, James Bernard, recognized the boy’s potential for acting.

Robert Donat started acting at age sixteen when he appeared in Shakespeare's Julius Caesar at the Prince of Wales Theatre in Birmingham, England. He then became a member of Frank Benson’s Shakespearean company for four years (1924-1928). After his marriage in 1929, he moved to London, eventually winning the part of Gideon Sam in Precious Bane (1931) which led to other roles.

Although his first film was Men of Tomorrow (1932), his early major success was The Private Life of Henry VIII (1934).  The Hollywood film which made his name internationally was The Count of Monte Cristo (1934). Although offered further roles in Hollywood, he did not settle there, preferring to live in England and continue with stage work. Other films he appeared in include Alfred Hitchcock’s The 39 Steps (1935), The Ghost Goes West (1936), Knight Without Armour (1937), The Citadel (1938) and Goodbye Mr. Chips (1939).

Theatrical productions he appeared in during the 1930s included The Sleeping Clergyman and The Good Natured Man.

During 1943 Robert Donat was in the GBS production of Heartbreak House in the role of Captain Shotover. The same year he leased the Westminster Theatre and as actor-manager produced three plays and a children’s pantomime, The Glass Slipper. He met his second wife Renee Asherson in 1945 when he was building The Cure for Love. They later acted together in Much Ado About Nothing.

As Donat’s health began to decline, he worked less on stage and in film, instead concentrating on radio work. Then in 1953, he appeared on stage as Becket in T.S. Eliot's Murder in the Cathedral at the Old Vic to wide acclaim. He also made a film, Lease of Life, about a country vicar living on borrowed time. Donat’s final film was The Inn of the Sixth Happiness (1958) in which he played the role of the Chinese Mandarin opposite Ingrid Bergman.

Robert Donat won an Oscar nomination for The Citadel (1938). His role in Goodbye, Mr. Chips (1939) as Mr. Chipping the schoolmaster earned him an Oscar. Other contenders for the Best Actor Oscar that year included Laurence Olivier (Wuthering Heights) and Clare Gable (Gone with the Wind).

He has a star on the Hollywood Walk of Fame and a plaque at his birthplace, at 42 Everett Road, Withington, England commemorates his life.

Robert Donat married the actress Ella Annesley Voysey in 1929. They had three children Joanna, John, and Brian. During World War II, Ella and their three children relocated to America. When Ella returned to England at the end of the war, the couple divorced (1946). In 1953 he married his long-time partner Renee Asherson. They divorced in 1958.

Donat died on the 9 June 1958 aged fifty-three. Cause of death stroke brought on by an undiagnosed brain tumor.

In the early 1930s, Robert Donat began suffering from severe asthma attacks that continued throughout the rest of his life.