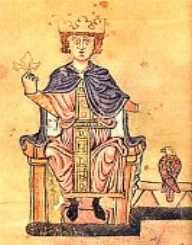 Frederick II was a Holy Emperor a member of House of Hohenstaufen of the medieval era and is often referred to as ‘Stupor Mundi’ or wonder of the world. He was coroneted as King of Sicily at three years of age. With his mother Constance of Hauteville as the regent.

Frederick II was politically ambitious and tried to set up a powerful centralized Italian state. He succeeded in establishing his reign through Italy, Germany and even Jerusalem. He faced conflicts with the papacy and was excommunicated four times. He was named Antichrist by Pope Gregory IX.

Frederic II was born on 26 December 1194 in Lesi, Italy. He was the son of Emperor Henry VI and Constance of Hauteville. His star sign was Capricorn. Though an infant he was elected King of Germany by his father. This was not possible as his father could not get the support to make his succession hereditary.

Emperor Henry VI died in 1197, and Frederick II was crowned on 17 May 1198 as King of Sicily. He was only three years old, and Constance of Hauteville was made Regent. She sent back the German counselors giving up her son’s claim to the empire and German throne. Her death caused Pope Innocent III to be appointed as guardian of Frederick II and also the empire of Sicily.

Sicily went through a lot of turbulence with local barons, papal leaders, German captains and others fighting to acquire control of lands. This continued till 1206 when the Imperial Chancellor took over Palermo and ruled the country in Frederick’s name till Frederick became old enough to do so himself.

In 1208 Frederick II was of age and with a troop of knights which he received through marriage regained control over Sicily and South Italy. He was able to regain some of the regal areas lost. Relations between him and the Pope started to strain.

Pope Innocent II then crowned Otto of Brunswick as the Holy Roman Emperor. Otto challenged Frederick in 1210 and invaded the royal domain. He, however, had to return as the princes of Germany dismissed him and elected Frederick II as king.

On Mar 1212 Frederick crowned his son Henry VII as King of Sicily and left for Germany. He conquered South Germany. In 1214 he defeated Otto in the Battle of Bouvines and was re-elected as King in 1215.

Frederick II put an end to the war of succession by capturing Theobald the Duke of Lorraine and Nancy. He invaded Lorraine and burned Nancy. On 12 Nov 1220 he was crowned as the Holy Roman Emperor in St Peters Church, Rome by Honorius III.

His son Henry held the title King of Romans. He overcame the Saracen rebels who later became his faithful subjects.

Revolt With The Papacy

Fredericks delay on his crusade as promised to Pope Honorius III started the strained relationship with the papacy. He set out in 1227 because of the persistent demand of the Pope Gregory IX but had to return owing to health problems. He was excommunicated for not fulfilling the Pope’s demands.

Frederick II finally went in 1228 and entered into a treaty at Jaffa by which Jerusalem, Bethlehem, and Nazareth were handed over to the Christians and Mosque of Omar retained by the Muslims. He also became the king of Jerusalem in 1229.

The Pope, however, condemned the treaty and sent an army to attack the regency. He defeated the papacy got the excommunication lifted in 1230 and got readmitted into the papacy. He set up a nonfeudal state in Italy.

This reopened hostilities with the papacy. He entered into a conflict with his son but easily overpowered imprisoned him. In 1245 Pope Innocent IV tried to enlist the support of French and English. Frederick fought but was defeated near Parma in 1248. In 1250 when the fortunes were turning, he died.

Frederick II constructed series of castles, fortified borders, and expanded harbors, set up the navy and arranged merchant's vessels and brought trade under control of the state.
He established Liber Augusta as a body of laws in 1231.

Frederick II founded the first European State University in 1224 in Naples where candidates were trained for his newly created civil services.

Frederick II revived classical arts. He encouraged poetry and literature. He was a polyglot and spoke many languages. He appreciated Arabic culture, and this led to his interest in scientific ideas.

Frederic II was married thrice. He married Constance of Aragon on 15 Aug 1209, Yolande of Jerusalem on 9 Nov 1225 and Isabella of England in Worms, Germany on 15 Jul 1235. He had a long relation with Bianca Lancia.

After Frederick II death his line died out, and the House of Hohenstaufen came to an end.