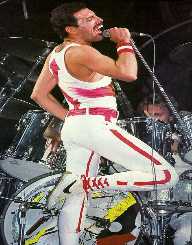 Freddie Mercury was born in Zanzibar, Tanzania and went to boarding school in India. Mercury’s father Bomi Bulsara was a colonial British official of Indian origin. Jer Bulsara, Mercury’s mother, died at age 94 in November 2016. Jer Bulsara, who was born in India, was Mercury’s biggest fan and supporter. Bomi and Jer Bulsara were living in Zanzibar during the 1964 revolution and had to flee with their two children to the UK. Freddie had a sister Kashmira.

Freddie Mercury studied the piano as a young child and later, when living in London, started playing the guitar.

In the 1960s, Freddie Mercury was living in London and a student at the Ealing School of Art.

Freddie Mercury’s first band was The Heretic. Later after the move to London, he became friends with drummer Roger Taylor and guitarist Roger May. Mercury discovered his voice and joined the band Ibex as their lead singer. He experimented with a few other bands, but after meeting bassist John Deacon, the four friends formed a band and called themselves Queen. Their debut gig took place in June 1971. In 1973, Queen released their first album Queen, and this was followed by Queen II (1974) and Sheer Heart Attack (1974).

Sheer Heart Attack (1974) brought them UK success when Killer Queen soared to number two on the UK charts and reached number twelve in the USA. In 1975 Queen released A Night At The Opera which contained the massive hit Bohemian Rhapsody, which topped the charts in the UK and was successful in the USA. Mercury’s unique voice was complemented by his skill as an entertainer. He was good looking, charismatic and dressed in a style as unique as his voice. Mercury loved an audience, and they loved him. Mercury was involved in the art and design of the band’s album covers. Queen toured and played to sellout concerts wherever they went. One hit followed another and including We Are The Champions from News of the World (1978). We Will Rock You also became a massive hit. In 1980 Queen released Another One Bites The Dust.

Queen and David Bowie recorded Under Pressure in 1981. The song became became a number one hit in the UK. By the middle of the 1980s, Queen were no longer recording monster hits, but they were still hugely popular and playing to massive crowds. The Live Aid charity event (1985) organized by Bob Geldof was televised around the world. Mercury gave what was considered to be an unforgettable performance. Televised images of the crowd at Wembley Stadium singing along to We Will Rock became the iconic image of the event. In 1985 Mercury released a solo album, Mr. Bad Guy and also worked with Montserrat Caballé, the Spanish soprano on the album Barcelona.

In the late 1980s rumors began to surface that Freddy Mercury was unwell. Mercury had contracted AIDS but had chosen to keep it private. When he did not promote Queen’s 1991 release Innuendo, fans began to worry. Later, on the 23 November 1991, Mercury issued a statement confirming that he had AIDS in November 1991. In the statement, he confirmed that he had tested HIV-Positive and that he had AIDS. He explained his reasons for keeping this private and asked for his friends and fans around the world to assist doctors and those worldwide fighting AIDS.

In 1992, the Freddie Mercury Tribute: Concert for AIDS Awareness was held in Wembley Stadium.
Awards. Acts included Elton John. Queen released Made In Heaven in 1995 which reached the top of the UK charts. This was based on Mercury’s final studio recordings. Then in 2001 Queen were inducted into the Rock and Roll Hall of Fame.

There is a bronze statue of Freddie Mercury on the waterfront in Montreux, Switzerland. Fans visit almost daily and often place flowers at his monument.