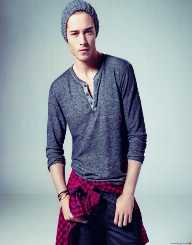 Francisco Lachowski was born on May 13, 1991, in Parana, Brazil. His parents are Roberto and Maria Lachowski.  He also has two older sisters, Isabella and Marcela.

Francisco Lachowski’s unique profile brought him fame in the modeling world. He is part Brazilian and Polish, which gives him features, unlike many other models. He has fair skin, like his Polish ancestors, but dazzling dark eyes and hair like his Brazilian family members. Francisco Lachowski also has a bit of German in him, which also adds to his good looks. He is 6’2”, which fans (mostly women) also love.

His modeling career began when he won the Ford Models’ Supermodel of the World Contest (Brazilian Edition) in 2008. With the win, Francisco Lachowski earned a $60,000 modeling contract with the agency. Working with the agency brought fame and attention into his life. The exposure helped him to land a photo shoot with Vanity Teen. This photo shoot also did a great deal to help his exposure and earn him more contacts, and with more contacts came more modeling contracts. His first major modeling contract after Vanity Teen was with Dior. It was with Dior Homme and Gucci that he first debuted on the runway in fashion shows in 2009.

Francisco Lachowski has also worked with many other famous modeling agencies, which include Wilhelmina New York, Why Not Model Management (Milan), Models 1 (London), Sight Management Studio (Barcelona), Scoop Models (Copenhagen), PMA (Hamburg), Kult Australia (Sydney), and Bravo Models (Tokyo) Since then, he has worked for countless clothing brands, including Armani, Gucci, Dolce & Gabbana, Roberto Cavalli, Mugler, Banana Republic, Peter Alexander, RW&CO, and Versace. Francisco Lachowski has also done shoots for several magazines, including FHM, Made in Brazil, Homme Essential, and GQ. He has also modeled in commercials and promotional videos. Throughout his modeling career, he had made some famous friends with other models, including Marlon Teixeira, Felix Bujo, and Florian Van Bael.

Francisco Lachowski had been honored on the Top 50 Male Models in the World list several times.

Models.com claims that he is one of the highest-paid models in the world. The website also puts him on some Hottest Models lists, including Sexiest Men and Top Icons Men.

Life Outside Of Modeling

Outside of modeling, Francisco Lachowski is just like anyone else. He loves to play sports. Some of his favorite sports are swimming, surfing, and skateboarding. He also loves to cheer on his favorite football team, the Brazilian-based Atletico Paranaense team.

Francisco Lachowski married Jessiann Gravel, another model, in 2013. Since then, the couple has had two sons together, Milo and Laslo. Together, the couple and the family have appeared in several magazines, including Galore, Cosmopolitan, Bare Magazine, Elle Quebec Magazine, Dress to Kill Magazine, and RW&CO. Beauty runs in the family! After marrying, the couple moved to Canada for a while (where Jessiann Gravel lived before the marriage), but they later moved to Brooklyn together. Francisco Lachowski still goes to Brazil to see his other family members from time to time as well.