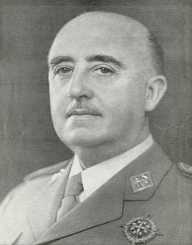 Francisco Franco was a Spanish general and dictator who is best known for his fascist regime that ruled Spain for over thirty-five years.

Franco was born in Ferrol, Galicia on 4 December 1892. Franco’s family were upper class and a strong tradition of serving in the Spanish military. His father, Nicolas Franco, was an officer in the Spanish Navy as was Franco’s brother who was also named Nicolas Franco. Franco’s father married Franco’s mother, Maríadel Pilar Bahamonde y Pardo de Andrade, in 1890. They had five children together, Francisco, Nicolas, Ramon, Maria, and Maria.


Career In The Spanish Military

Franco was unable to follow the family tradition of joining the Spanish Navy as the Spanish American War had left it vastly reduced and in no need of new officers. Franco instead joined the Spanish Army and began training in Toledo in 1907. Upon graduation in 1910, Franco was made a lieutenant and was sent to serve in the Rif War in modern day Morocco. Franco was placed in command of native Moroccan forces and rose to the rank of captain before he was grievously wounded in 1916. After recovering from his wounds, Franco was awarded for his gallantry and promoted to Major. Following his promotion, he returned to Spain and became second in command in the newly formed Spanish Foreign Legion. The Legion was deployed to Morocco and achieved great success earning Franco, further promotion to the rank of lieutenant colonel. With the war almost won in Morocco Franco attained the rank of brigadier general, making him the youngest general in Europe at the time. With the war in Morocco at an end, Franco was made the director of the newly created military academy of Zaragoza. This position placed Franco in charge of all incoming army recruits.

Franco was removed from this role in 1931 when Republicans seized control of the country. Under the Republican government, Franco was marked as a noted monarchist and was kept under surveillance. In 1933, Franco was given military command of the Balearic Islands, ostensibly to remove him from mainland Spain. Left-wing rebellion flared in Spain in 1935, and they then won a narrow victory in the 1936 general election. Franco was given a posting in the Canary Islands, again to keep him away from Spain. It was in Tenerife that Franco became part of the military plot to overthrow the Republican government. Franco flew to North Africa to take command of the Spanish African Army, and on 17 July 1936 rebelled against the Spanish Government. A coup in Spain failed to take control, and although the Nationalist rebels controlled up to a third of Spain, the Spanish Navy supported the Republican side. The naval supremacy of the Republican side meant that Franco was trapped in Africa.

Civil War And Rise To Power

The war would draw in foreign intervention from the Soviet Union, Italy, and Germany. Fascist Italy and Nazi Germany deployed troops, and air support on the side of the Nationalists and the Soviet Union sent men, arms and financial support to the Republicans. Both sides also received volunteer companies and international brigades from across the world. Franco cemented his control in North Africa by purging the army of officers loyal to the Republicans; some 200 officers were executed during this purge. Franco then used German and Italian air support to clear a corridor for his forces to invade the Iberian Peninsula. Franco now in Spain was awarded the title commander in chief of the Nationalist forces following the death of the uprising’s instigator Jose Sanjurjo in a plane crash. Franco was the only general in the army who had not previously been involved in attempted coups or politics and as such was seen as a neutral candidate amongst the different factions. Franco was named the head of the army and the head of the state by the Nationalists.

Franco was also aided by the deaths of the other coup leaders during the war. Franco led a conservative war against the Republicans, using his aerial superiority to push back Republican forces in a broad front. In 198 Franco succeeded in dividing Republican forces between Madrid from those in Barcelona, and an attempt to unify their positions by Republicans was repulsed at the Battle of the Ebro. Franco then focused his attention on destroying the Republicans in Catalonia. Barcelona fell on 26 January and soon after Franco was recognized as the head of state by France and Great Britain. Franco then marched on Madrid, the Republican forces in the city turned on each other before Franco arrived. It took just three days of fighting for Franco to take Madrid and end the Civil War.

Franco’s forces carried out reprisals across the country against the defeated Republicans. At least thirty thousand were executed and thousands more died in prison and labor camps. Half a million Republicans fled to France following the end of the war. Thousands of these refugees were later rounded up by Vichy France and handed over to the Franco regime. Franco did not join his fascist allies during World War II as Germany rejected Spanish demands for French North Africa and supplies of food and weapons for the duration of the war. Franco did allow Italian and German ships to dock in Spain during the early years of the war and sent a volunteer unit to aid the Axis invasion of the Soviet Union. Franco’s rule was defined by its strong support for conservative Catholic ideals.

Franco supported technocrats on economic matters. Spain was left ravaged and isolated by the Civil War and its neutrality in the Second World War. The Cold War brought Spain into the U.S’s sphere of influence, and its economy began to recover slowly. Franco also cracked down on the autonomy of Spain’s regions. Basque, Catalonian and other regional languages were banned. It was in the Basque region that much of the resistance to Franco came from. Euskadi Ta Askatasuna began their guerrilla campaign in 1959 against his rule. Franco restored the monarchy in 1969 when he named Juan Carlos de Borbon as Prince and heir apparent to the throne of Spain. Franco gave up the position of prime minister in 1973, and ETA assassinated his successor. With his health failing, Franco made Juan Carlos head of state in 1974 and then died in 1975.

Franco married Maríadel Carmen Polo y Martínez-Valdès in 1923, and they had a daughter, Carmen, together. Franco died on 20 November 1975 in Madrid having fallen into a coma a week earlier.