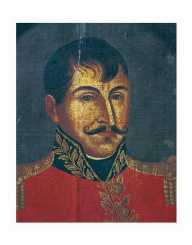 Francisco Jose de Paula Santander Omana was born in the city of Cucuta, on April 2, 1792. His father, Juan Agustin Santander Colmenares, was a governor and the owner of a cocoa plantation.

His mother’s name was Manuela Antonia de Omana Rodriguez. Both of his parents were part of wealthy aristocratic families that moved from Spain to South America. He studied law school in the city of Bogota.

At the age of 18, Francisco de Paula Santander quit his law studies and enlisted in the military. He took part in the battles for the independence of New Granada from the Spanish Empire. In 1812, he got the title of colonel. In 1817, he was promoted to brigadier general.

In 1819, he was the battlefield commander during a few crucial battles, so he earned the title of commanding general.

The battles lead to the formation of a new country, called Gran Colombia. In 1821, Santander was elected as Vice President, with Simon Bolivar as the President. Shortly after, Bolivar left to conquer new areas, leaving Santander in charge.

As the new ruler, he worked towards free trade, he reduced the taxes, and he improved the conditions for immigrants. Bolivar resumed his position in 1826, but he and Santander had many fights and disagreements. Two years later, Santander was exiled from the country.

Francisco de Paula Santander spent the next few years in Europe. He studied the political movements over there, especially the Enlightenment. During this time, Bolivar died, and the country of Gran Colombia broke up.

A new country was formed, called the Republic of New Granada. Francisco de Paula Santander returned there in 1832. The new Congress elected him as President of the country. During his term, he focused on cooperating with developed, industrialized nations. He also executed the Spanish officers that opposed the revolution. His term came to an end in 1836.

Santander remained politically active after his presidency. He became a Senator. He was one of the initial ideological founders of the Liberal Party of Colombia.

Francisco de Paula Santander remained a bachelor for most of his life. In 1811, he had a son, Manuel, with a woman named Mariquita. Years later, he was in a relationship with a woman named Paz Piedrahita Saenz. In 1933, they had a son, named Francisco de Paula Santander Piedrahita. Three years later, he married Sixta Ponton. Their son, Juan, died at birth. They then had two daughters, named Clementina and Sixta.

Francisco de Paula Santander suffered from gallstones and passed away on March 6, 1840, in Bogota. He was only 48 years old.