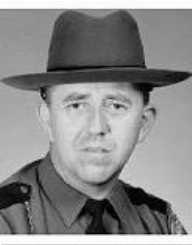 During World War II, Floyd Mann joined the US Military and saw service in Europe. He was a tail gunner on a B-17 and participated in the first daylight raid over Berlin, Germany. Because of the danger of the missions, most airmen were limited to 25 missions, Mann flew on 27.

Floyd Mann left the US Army with the rank of colonel. When he returned home from war, Mann enrolled at the National Academy of the FBI and worked in law enforcement. During the 1950s, he was the police chief in Opelika in Lee County, Alabama. In the late 1950s, he was appointed as head of Alabama’s Department of Public Safety by Governor John Patterson.

Although a segregationist, Floyd Mann was a decent man and when he discovered that local police departments were standing down long enough for the Klansmen to meet the riders at the bus stations in places like Aniston, Birmingham, and Montgomery, he took action.

A Greyhound bus carrying Freedom Riders was attacked in Anniston, and although the driver managed to escape and drive out onto the open road, the mob followed in cars and trucks, blowing out the tires of the bus. A firebomb was thrown through the window, and others held the doors closed, so passengers were trapped in flames.

Mann had placed a plainclothes officer on the bus, and when this occurred, he drew his weapon and threatened to shoot those blocking the doors. In Montgomery, on the 20 May 1961, the local police again abandoned a busload of Freedom Riders as they arrived in town.

Floyd Mann was prepared and had posted 100 highway state patrolmen on standby. Initially, there was a terrible outbreak of violence against the Freedom Riders when Klansmen attacked, but Mann called in his troopers and ordered the attackers to disperse. He showed extreme bravery by jumping into the fray himself and rescuing people.

Floyd Mann worked at the University of Alabama. He also served as assistant to David Matthews under the administration of President Gerald Ford. In the 1980s, he was the director of the Alcoholic Beverage Control Board in Alabama.