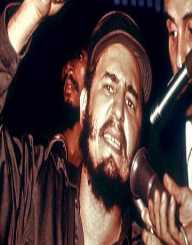 Fidel Alejandro Castro Ruz was one of the most revolutionary leaders of Cuba. He led the Cuban Revolution successfully and implemented Socialist reforms. He was prime minister, president and Military Commander of Cuba.

Fidel Castro's parents were Angel Castro y Agrgiz and Lina Ruz Gonzalez. He was the third child the couple. They were a wealthy family. Castro was born on 13th August 1926 in Biran, Cuba.

Castro, at the age of six, was sent to Santiago de Cuba to live with his teacher. He enrolled at El Colegio de Belen in Havana. He was an average student but loved sports and fond of Baseball.

He studied law at the University of Havana. He obtained Doctor of Law in 1950.

Fidel Castro joined the University Committee and opposed U.S intervention in the Caribbean and fought for the independence of Puerto Rico.

His speeches on corruption and violence brought him into the limelight, and he gained prominence.

In 1947 Castro joined the Party of Cuban People, a socialistic group which was fighting for an honest government and political freedom. The party also give importance to social reforms and economic independence. Castro also became the President of the University Committee for Democracy.

Fidel Castro participated in the rebellion against the Govt. of the Dominican Republic and Colombia. He tried to overthrow the then President of Cuba, but his attempt failed. He was imprisoned for a year.

He then went to Mexico to form a revolutionary group, the 26th of July Movement. He returned to Cuba and organised the Cuban Revolution and waged a guerrilla war against the President of Cuba. In 1959, the President was removed from power

Fidel Castro took control of the military and became the Prime Minister. The United States unsuccessfully tried to remove him by economic blockage including The Bay of Pigs Invasion in 1961.  He used to get death threats.

Castro allied with the Soviet Union and allowed nuclear Weapons in Cuba. This sparked a cold war in 1962.

He adopted a one-party socialistic state under Communist Party rule. He introduced economic planning, health care, and education. The Press was not allowed to publish internal dissent. He also supported anti-imperialist groups abroad.

Fidel Castro assumed the leadership of the Non-Aligned Movement from 1979 to 1983, and Cuba’s reputation in world stage improved. In 1991, the Soviet Union was dissolved, and Castro had to think of environmentalist and globalisation ideas.

In 2000, Castro aligned with Latin America. This is termed as Pink Tide (a term given to new reform within Latin American countries that have Leftist political leaders). In 2006 he gave up his powers to Vice President Raul Castro.

Fidel Castro is viewed as a champion of Socialism and anti-imperialism. There was also criticism that Castro was a dictator. He has many international awards to his credit.

In 1947 he joined the expedition to overthrow the military rule in the Dominican Republic. The invasion was stopped. He returned to Havana to participate in the student unrest.

In 1948, Castro travelled to Colombia. The assassination of the leftist leader there caused wide-spread clashes between the Conservatives and the Liberals. Castro supported the Liberals.

He then returned to Cuba and found that the then government in Cuba was not able to control the gangs.

Fidel Castro was influenced by the writings of Karl Marks and others and adopted a view that political change could be brought about only by revolution. He led the anti-racist campaign by students.

Castro exposed the secret deal by the gang within the University and identified the key members. The gang members were furious, and Castro fled to the U.S to avoid the gangs. He returned to Havana later and concentrated on his studies for the Doctor of Law in 1950. He took part in the high school student protest in Nov.1950 protesting against the ban of student associations and arrested and let off.

Fidel Castro was nominated for the House of Representatives. A former president, Fulgencio Batista returned to politics in 1952 and seized power in a military coup and declared himself as President. During his period, elections were cancelled, relations with the Soviet Union severed, and he was pro-US.  He also suspended trade unions and Cuban Socialist Groups.

Fidel Castro formed a Group, “The Movement” to oppose the dictatorship of the President in 1952. The movement was organised in small groups called the clandestine groups.  In 1953 Castro made a failed attempt to overthrow the President. He made a spirited speech; History will Absolve Me, (published later). He was sentenced for a 15-year term. He spent his time in reading works of great authors.

Castro renamed his group as “26th of July Movement (MR-26-7)" and founded a school for prisoners.

In 1954 Batista’s government conducted the presidential election. Castro along with other prisoners was released for political and under pressure. In 1955 Castro returned to Havana and started giving interviews, radio talks, and press conferences, though the government had kept a watch over his movements and curtailed his activities. He also began strengthening his group, MR-26-7.

Fidel Castro and his brothers had to leave the country in 1955 after Violent demonstrations against the govt, to avoid arrest. They left for Mexico.

In Mexico, he acquired the Guerrilla war skills. Castro widely travelled over the USA to raise funds. There were failed attempts to assassinate him. While in Mexico, he still had contacts with Cuba Student Organizations and his July 26th Movement.

Castro landed in Santiago in 1956 and attempted a failed uprising. He raided small police outposts to seize weapons. The revolution gained the confidence of locals. The MR-26-7 continued agitation in urban areas and sent supplies to Castro.

In 1957, Castro met members of his group to discuss the future operation. He also met Celia Sanchez who became a close friend.

The anti-President group carried out violent attacks across Cuba in 1957. Castro and his revolutionary groups carried out Guerrilla attacks for two years hiding in the thick mountain ranges of Sierra Maestra. The US had also stopped supplying Weapons to Batista.

The govt, troops could not stop the revolutionary groups as they had no experience in guerrilla warfare. Besides, soldiers from Batista army defected to Castro group. The MR-26-7 launched a severe attack forcing the military to retreat and clear out of the mountain ranges. This forced Batista for a cease-fire and going to exile in 1958.

The Supreme Court judge, Carlos Piedra was declared as President. The new president started appointing his new government. Castro was not happy and ended the cease-fire but prevented looting and arson.

In 1959, Fidel Castro entered Santiago invoking War of Independence and headed towards Havana where he was greeted by cheering groups.

Castro proclaimed Manuel Urrutia Leo as provisional President. The ministers were pro-Castro. Castro assumed himself Representative of the Rebel Armed Forces and set up an office in Havana.

Castro was Instrumental in cutting corruption, fight illiteracy. He also Removed pro-Batista elements from their positions. He even contemplated the creation of a Socialistic State.

In 1959, Fidel Castro became the Prime Minister of Cuba. He travelled to US, Trinidad, Brazil, Uruguay, and Argentina. The same year he signed a Law, the First Agrarian Reforms which envisaged many reforms. President Urrutia was replaced by Osvaldo Dortices, a Marxist.

Castro stressed on improvement in the standard of living, education. Health care was nationalised. Arranged vaccination against childhood diseases and improvement in infrastructure. There was opposition from doctors and engineers who migrated to Florida causing economic brain drain. There was unrest in the country. This led to Escombay Rebellion.

In 1960 there was a cold war between the US and the Soviet Union. Castro established a relationship with the Soviet Union. Trade agreement between Cuba and USSR followed. Castro nationalised many US controlled refineries, banks, and sugar mills.

US tried to overthrow the Fidel Castro govt with the help of CIA. Castro attended the UN General Assembly in 1960. There he met Soviet Premier and other dignitaries such as Polish Secretary, Bulgarian Chairman, Egyptian President and Prime Minister of India.

Castro expected a coup in Cuba backed by the US and spent millions of Dollars to acquire weaponry from Russia, France, and Belgium and doubled his armed forces. He trained civilians in combat techniques.

In 1961, the support of the US to Democratic Revolutionary Front, to overthrow Castro government led to Bay of Pigs invasion, a failed coup attempt.

In 1962, Fidel Castro established the United Cuban Socialistic Revolution. The technicians from the Soviet Union were invited to Cuba. The Cuban economy was still declining because of poor management.

Castro allowed Russia to station nuclear missiles in Cuba on the presumption that this would guarantee Cuba’s safety and Socialism. This led to a crisis between the US and the Soviet Union and the Cuban Missile Crisis.  However, Russia was not interested in nuclear war.

In 1963, Fidel Castro visited the Soviet Union and addressed a gathering from Red Square. Russia granted Castro Order of Lenin and a Doctorate from Moscow University.

He started calling for world revolution and supported anti-Imperialistic movements. Cuba also did not agree to sign the Treaty on the non-Proliferation of Nuclear Weapons.

Castro’s many reforms were popular despite economic problems. Cuba sought the help of Soviet Russia. The Non-Aligned Movement Conference was held in Havana in 1979 where Castro was chosen as its President. He held this position until 1982.

Cuba went through economic decline for many years since 2002. Castro had to introduce strict measures to improve the Cuban economy. He delegated his powers to Raul Castro in when his health deteriorated.

In 2008, Raul Castro was elected President.

In 1948, Fidel Castro married Mirta Diaz Balart, a wealthy student. The relationship was a love affair. They spent their honeymoon in New York.

Mirta gave birth to a son, Fidelito. They moved to a bigger accommodation In Havana. During Castro’s jail term in Cuban Movement, Mirta took up an appointment in the Ministry of Information. Castro was upset and initiated divorce proceedings.

Castro had affairs with Naty Revuelta and Maria Laborde and had a child from each one of them.

Fidel Castro underwent surgery in 2006 for internal bleeding. He declined to accept the position of President and Chief of Army.