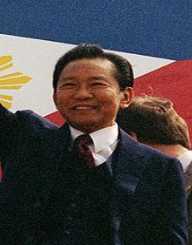 Born in Sarrat, Ilocos Norte Province, Philippines on 11 September 1917. His parents were Josefa Edralin and Mariano Marcos. Both parents were teachers from well-connected families. Later, Marcos’s father went into politics.

Ferdinand Marco's biological father was a wealthy Chinese man, Ferdinand Chua who assisted him in many ways.

Ferdinand Marcos went to school in Manila. In the 1930s he studied law at the University of the Philippines. He was a good student and also excelled at sport. Ferdinand Marcos was known for having an unusually good memory.

In 1939 Ferdinand Marcos was found guilty of the assassination of a politician. His father, brother, and brother-in-law were all involved in the assassination. Julio Nalundasan was a political opponent of his father. Nalundasan was shot by a sniper in his home in 1935. In 1940, the Marcos family appealed the decision in the Philippine Supreme Court and won. Marcos who had by then completed his law degree, started practicing law in Manila.

Ferdinand Marcos made claims that he had been a leader in the Filipino guerrilla resistance, using this in his political campaigns. US government records show that he had played very little or no part in the resistance movement.

Initially, Marcos worked for the President of the Third Philippine Republic. He was also a member of the House of Representatives from 1949 to 1959 and the Senate from 1959 to 1965. By 1965 Marcos was a well-established politician, an important member of the Liberty Party.

Ferdinand Marcos by then had ambitions to be President, and when he did not win his party’s nomination for the role, he resigned. He subsequently ran as the Nationalist Party’s candidate. After an ugly and difficult campaign, Marcos beat the Liberal Party’s nominee, Diosdado Macapagal. Ferdinand Marcos was inaugurated on the 30 December 1965. In 1969 he was re-elected. He had focused on education and the economy. This did not stop political unrest in the country. Student demonstrations and guerrilla activities were becoming an issue for Marcos.

In 1972 Ferdinand Marcos declared Martial Law. His reasoning was that communists were disabling the country. Politicians and students activists were jailed. Benigno Aquino was held in detention for eight years. The New People’s Army (communists) and the Moro National Liberation Front (Muslim separatists) were becoming active in the provinces. This gave Marcos reason to increase his powers. Martial Law ended in 1981, and Marcos was elected President.

In later years the Ferdinand Marcos regime was accused of corruption, stagnation and of having favored the wealthy. It was also accused of mishandling the burgeoning communist guerilla issues in rural areas.

Political activist Benigno Aquino Jr sensing the change in the country returned to Manila in 1983. He was assassinated. The finger was pointed at the government. A commission Ferdinand Marcos set up to investigate Aquino’s assassination blamed high ranking army officers. A physically ailing Ferdinand Marcos called for presidential elections in 1986. His opponent was Corazon Aquino, Benigno's widow. Through voting fraud, Marcos won. Marco’s legitimate right to the presidency was now seriously in question. The military was divided on the issue. Aquino’s supporters asserted her right to the role. In February 1986, encouraged by the US, Ferdinand Marcos fled the country and moved to Hawaii.

Ferdinand Marcos married Imelda Romualdez in 1954. Imelda became an iconic figure. A former beauty queen with a sense of style, she became powerful political figure in her own right. She was also known for her lavish spending, her shoe collection, and her jewels. Imelda Marcos was appointed Governor of Metropolitan Manila from 1975 to 1976. She was also Minister of Human Settlements and Ecology from 1979 until 1986. During this time she was often accused of nepotism.

Ferdinand Marcos was initially a Roman Catholic. Later, he was baptized into the Philippine Independent Church.

Ferdinand Marcos died in Honolulu Hawaii on 28 September 1989. He was 72. After his death, it became apparent that the Marcos regime had stripped the Philippines of billions. Marcos and Imelda were both accused of racketeering and corruption.